Timing worked out. Hair is purple. Two very different characters in three days are in the can, w00t!!

And I am off to collapse on the couch now.
Posted by Unknown at 6:58 PM No comments: Links to this post

Staying a step ahead of circumstance

Weird, weird week, driven mostly by two different shifts in the Cyrus shooting schedule. The second of which (due to a late-breaking emergency for an actor being flown out from LA) occurred too late for me not to drive to Michigan on Monday afternoon. Ah, well. At least I got to meet pretty much everybody, including the guy playing the younger version of Brian Krause in my scene, so I'll feel that much more at home when I go back to actually shoot on Saturday. That's more valuable than it might be in circumstances where the crew haven't already been there for almost a month, and most of the other actors still there have been for a week or two.

So, no stories yet, except that the motel is oldish and cheapish and really freakin cold -- it took my room several hours to warm up the other night with the heat on full blast! The people running it are nice, though, and seem to be having fun with the outpost of Hollywood Midwest that has essentially taken over their second floor. The town is also smallish, but as it has actual businesses and stoplights, I'm trying not to snicker aloud at a few dyed-in-the-wool city folks who are fairly convinced they have been consigned to Hell. (They're mistaken; it's actually a fair bit east and a little north of our location.)

Meanwhile, one of my zillion recent auditions got instant gratification -- I was the last person reading last Saturday for a student film at Columbia College, and the guy offered me the role on the spot! It's a punk girl grieving for her boyfriend, and I was actually kinda looking forward to having purple hair for a couple weeks. With the schedule shift, though, it's looking like we might need to downshift to clip-in extensions, because various people's schedules may result in my shooting one short scene Friday morning before I head back to Michigan. And Tanny is not the purple hair type, to say the least. I'm jazzed about filming as such radically different characters so close together, but wasn't banking on it being quite such a game of Schedule Tetris! %-}
Posted by Unknown at 12:45 PM No comments: Links to this post

...from the wild hinterlands of Hollywood Midwest:

I love an environment where "I have to go make blood" is a perfectly sensible statement.
Posted by Unknown at 8:54 PM No comments: Links to this post

In which our Diva waxes long and spoilery, and demonstrates that she should probably not be permitted to meta on insufficient sleep
Thumbnail checklist...
Characters: Appealing and/or interesting
Performances: Excellent (yes, including Paris Hilton)
Music: Solid
Lyrics: Straightforward but mostly uninspired
Thematic resonances: Many and potentially rich for mining
Narrative structure: Problematic
Visuals: Yum
Overall: Flawed but worthy achievement. Worth seeing.
The long and spoilery version... 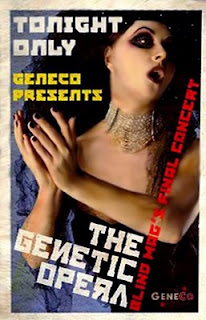 Running on 3 1/2 hours of sleep. Totally worth it. With the caveat that it's a bit more thanks the the "event" atmosphere at the Music Box last night than to Repo! The Genetic Opera itself. Needless to say, the "Repo Army" were out in force, with a number of well-done costumes, including one Repo Man, and it was just a fun atmosphere from the start.
The movie is far from perfect, but by no means a waste of time. In the cold light of morning, it struck me that I'm reacting to it like a workshop performance of a show with a lot of exciting potential, but which still needs some serious work to get there. Which is a deeply weird way to respond to a movie, and certainly not applicable if they do achieve a wider release, but I think it might be the optimal way to approach it. Like, "this is an experiment, let's see how they do." I'm actually more curious to see how these guys and/or others might build on the results than excited about Repo itself.
That said, there is a lot to like. The comic-book intros were beautifully done and well integrated, though I think the first one might be a bit overlong. It set the tone for the broadly archetypal characters and plot elements. Which are also definitely the most genuinely operatic aspect of the whole thing, even more so than the fact that it's through-sung.
Which I need to take a moment to appreciate. Yes, Virginia, recitative will play in a movie, and someone finally proved it. That was one of my cardinal annoyances with both PotO and Rent -- that the former forced the actors to speak big chunks of lyrics awkwardly over the orchestration, and the latter converted them to straight dialogue.
That said, I really wish the lyrics for the full-out numbers had been stronger. There are a few flashes of poetry, but for the most part, they're literal and straightforward, often to the point of going *thud* when the music and the passion of the performance isn't quite enough to carry them. Which, to be fair, is also not an uncommon trait of opera -- heaven knows some of the texts I've sung were not the most scintillating poetry, in or out of the original language. And of course it's equally attributable to the punk portion of the score's colorful pedigree, but even punk has poetry, at least at its best. There are also a couple numbers, most notably "Chase the Morning," that never quite get developed into fully fledged songs and deserve to.
Be prepared for stylistic whiplash. The veer into full-throttle camp with the first appearance of Largo's obnoxious children, and the continued over-the-topness of those characters, is jarring as hell, as is the suddenness of Shilo's fantasy sequence (complete with Joan Jett backing her up!) on "Seventeen." I did eventually get used to the gear switches, but never enough that it didn't feel a bit patchworky at all times. Which is the price of their very deliberate eclecticism (as Darren Bousman put it at the Q&A afterward, "Sarah Brightman and Ogre in the same room! Who expects that?"). I think the transitions could have been smoother, but there appears to have been a conscious choice for them not to be. I respect that, but don't entirely agree.
The singing is pretty uniformly strong, with Anthony Stewart Head (unsurprisingly) rather handily walking off with the thing. He rips through his numbers with more power than I think I've ever heard from him before, and the flips from overprotective dad to vicious eviscerating monster are nothing short of stunning. Terrance Zdunich (also one of the writers) runs a very close second as the Grave Robber, a Greek-chorus sort of character with buckets of charisma and a passing resemblance to RiffRaff in RHPS.
Speaking of evisceration... Somewhat to my surprise, this is not a horror movie. Even a hybridized one, really. It is, however, a brutally violent dystopia, and has its share of gore, though actually not as much as I expected. And the effects, while undeniably gross at times, are just this side of truly realistic. It's like a top-notch haunted house -- the props are very detailed and gooey, but all the while you're thinking "the body doesn't work that way" and are close up enough to tell they're not the real thing. I wouldn't be a bit surprised to find out most or all of the assorted body parts were purchased ready-made in a Halloween store. (Given that the whole thing was made for $7M, and Bousman specifically stated in the Q&A that all the costumes were either bought ready-made or provided by the actors, it actually seems pretty likely.)
It fits in well with the unapologetic theatricality of the whole enterprise, really -- it's like Baz Luhrmann's "Red Curtain," but (artfully) torn and bloodied.
Posted by Unknown at 1:41 PM No comments: Links to this post

Our Lucy's hubby drew this masterpiece, and everyone got a copy on closing night: It would take me DAYS to explain all the in-jokes. Suffice it to say we were all helpless with laughter for quite a few minutes when they were given out.

(If you didn't already guess, I'm represented in the bottom left corner.)
Posted by Unknown at 2:51 PM No comments: Links to this post