As you may have noticed, or at least heard (and heard, and heard, and heard -- the meteorologist on the local news sounds very tired of having to say this stuff!) it's been an awful lot of cold and snowy lately. Now, yours truly -- despite being made entirely of northern European barbarian DNA and having moved to Chicagoland on purpose -- is not a fan of this winter business. Not one little bit. Well, maybe a little bit. A couple weeks of pretty fluffy snow viewed from the nice warm indoors would be fine.

But what's going on this year is more than a little wearing, and I've been combating it by tackling some long-overdue rearranging and organizing and decorating. My house dates to 1908, an American Foursquare that the former owner (a contractor and carpenter himself) updated in all the right ways, keeping intact its beautiful Craftsman woodwork, including the dining room built-in with its original leaded glass.  I fell in love with it the moment I walked in the door just over nine years ago, and promptly dove into research, dreaming of how to bring out its historic character before even making an appointment with a home inspector.

Other pursuits always seem to take precedence, of course, and for the most part those dreams go unrealized. But in the last couple weeks, I've mostly finished overhauling the spare bedroom, a process that started several months ago with expanding the existing shelving to accommodate the lifelong collection known as Val's Personal Doll Army.

Along the way, I've done a lot of thrift shopping, a little painting of shelves thus acquired, some rejiggering of the closet configuration, and spent basically a whole day sitting on the floor devising a new filng system for sheet music that wll actually keep it neat this time, darnit! (That last resolution will be helped by the sad fact that Elgin Opera is no more, which means I'm not tossing another concert's worth of pages on the "I'll put that away later, really I will" pile every few months.)

Probably my favorite design inspiration is one that didn't cost a dime: A pair of vintage blue suitcases that belonged to my grandparents brought up from the basement and stacked into an instant nightstand that perfectly suits the height of the bed and the color scheme and quirky cottage feel of the room.

With only a few small details left there, I've turned my attention to the bigger challenge of organizing the basement, which includes my sewing room and new (and for the moment somewhat makeshift) recording studio for audiobooks. It's not as creative and fun as taking a room and making it pretty and welcoming, but it's the logical next step (at least in the way the house and the stuff in it all goes together in my head) necessary before making the rest of the rooms as pretty and welcoming as they deserve to be.

It'll be a while, for instance, before I can even consider anything involving paint in any way, let alone anything on the order of what latter-day Pre-Raphaelite muse, artist, and blogger Grace has created in her Catty-Corner Cottage. (Hubby and I have been saying from the beginning that this house deserves a name, but we've yet to come up with one. Maybe that'll finally arrive this year too!) Especially the Twelve Dancing Princesses (one of my favorite fairy tales too!) in procession around her dining room walls.

On both that blog and her wider-focused one Domythic Bliss, one of the things I love is how much of it involves making your home fairy-tale beautiful with everyday resources. The trade-off for not spending a lot of money is time, of course, but for many of us that's part of the fun.

When William Morris designed Red House, both money and time were involved, not to mention the talents of Morris' illustrious circle of artistic friends. Recent conservation work has uncovered ever more of the extensive decorative painting throughout the house, including some figures thought to have been painted by Elizabeth Siddal.

I'm not far from that phase of Lizzie's life in writing Unvarnished, and am just realizing how I've set up for it in some sections that talk about their paintings as a world of their own creation. Red House was a truly an entire little world of Morris' own creation, realized with the collaboration of his wife Jane and their friends. (A Twitter conversation last week with Dinah Roe reminded me that there's a great deal that needs to be said about Jane's artistry with an embroidery needle and how it gets largely ignored, but that's a tangent for another day.) What an amazing way to fill hours and walls! Sounds like a party to me.

Funny thing -- when I was fifteen, and all this Pre-Raphaelite and Arts and Crafts obsession was still several years in the future, I got it into my head that I wanted to paint a full-wall mural in my bedroom. By that time we lived in a house we owned, after most of my Air Force brat childhood spent living on base, so it was technically not out of the realm of possibility.

Of course, no sane parent is going to turn a fifteen-year-old loose on an innocent expanse of white interior latex, but someone (I don't remember whose idea it was now) came up with the brilliant compromise of tacking up an old white sheet with plastic sheeting behind it. I spent a good chunk of my summer filling it with a rainbow, pot of gold, and flowers, and loved every minute. Once it was finished, I could wake up every morning, put on my glasses, and look at the big window onto a world I had made with my own hands and imagination. Kitschy and derivative imagination, sure, but all mine.

It was an amazing feeling. Making something special always is. I'm hoping to have that feeling a lot more by the time I've finished realizing the dreams for my grownup Arts and Crafts haven. 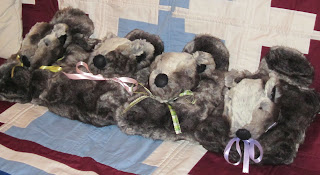 Speaking of making special things, here's a footnote more related to the previous post: Last week, on a Wombat Friday whim, I put together a "Wombat's Lair" Etsy treasury for the enjoyment of the Earnest Damsels Collective and other wombatophiles. One of the featured crafters, Isobel Morrell of Coldham Cuddlies, messaged me a lovely thank-you for the inclusion, and shared her coinage of the phrase "a wonderment of wombats," (as well as some nifty insights into her crafting process) having decided that the standard group noun, a mob, just wouldn't do for the purposes of her adorable plush creations. I have to agree, and have resolved to refer to our Wombat Friday assemblage as a "wonderment" forever more.
Posted by Unknown at 10:19 PM 2 comments: Links to this post