A couple weeks ago, a friend alerted me to Drunk History's "Stumble Into History" contest, which called for videos of fans posing as historical figures to react to their portrayal on the show. It sounded like fun (and getting flown out to warm, sunny LA to do a walk-on in Season 3 sounds particularly good right about now!), but I've had other priorities, so it wasn't until this past weekend that I did anything about it.

At which point, I pulled it together in less than a day, with resources I had around the house, and uploaded my entry a comfortable three hours before deadline. I'm pretty pleased with myself for that. :-) 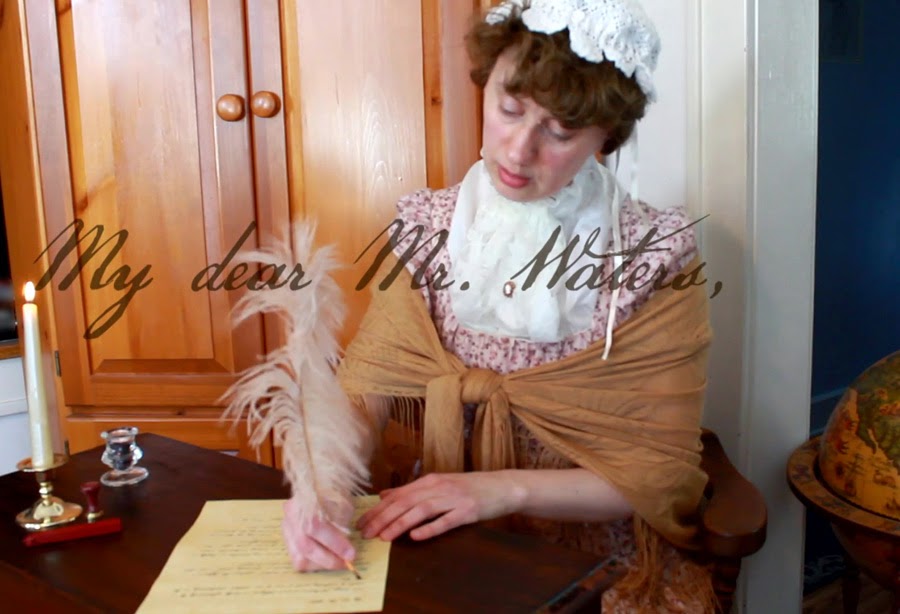 I spent a fair amount of time waffling among the awesome ladies on the list -- Mary Dyer? Dolley Madison? Nellie Bly? -- but ultimately Abigail Adams and her legendary letter-writing were always going to prevail. (I am rather sad nobody represented for Nellie, the original intrepid girl reporter.)

So, interspersing some of Mrs. Adams' famous words with a few of my own invention, I took pretend quill pen in hand and threw my mob cap in the ring.

You can check out the results here and (if you feel so inclined and if you have a Facebook account, on which the voting mechanism unfortunately depends) vote for me once a day until next Monday, March 2. Comments and sharing are also most definitely welcome, and thank you!!
Posted by Unknown at 1:26 PM 4 comments: Links to this post

In which our Diva commits vlog with tremendous ambivalence and curiosity

I am, as you may have noticed, not even a little bit famous. Despite this fact, from time to time, I receive an email or letter asking for an autographed photo. Typically they mention a relatively recent credit from my IMDb page, tell me a little about themselves, and are generally polite and respectful.

The one currently sitting in my inbox (waiting for me to get around to printing a promo photo at Walgreens in a size that can be sent with regular letter postage, which the 8x10 headshots I actually have on hand rather decidedly can't) says he's a fan from Epitaph: Bread and Salt. Now, that has over half a million views on YouTube, increasing the odds that he's actually seen it, as compared to some other films requesters have mentioned.

One of the previous requests I've received, upon googling the name of the requester together with "autograph" (because I'm nothing if not a curious beastie), let me to this blog post by author C. Leigh Purtill. She was understandably baffled at receiving an autograph request from a Polish gentleman who seemed vanishingly unlikely to have actually read her books, and took her blog to see what her readers made of it. I'm guessing she probably never predicted that there would still be a fairly lively discussion happening in the comments nearly six years later, with all manner of obscure public figures (including myself) chiming in to relate their stories, share the names of requesters, and puzzle over why they're interested in us.

It says a lot about the state of the world, and particularly of trying to make a go of it in the entertainment or publishing industry, that the first place pretty much everyone's mind goes is "Is this some kind of scam?" The short answer, as far as I've been able to determine, is no, although currently the discussion is circling around the pros and cons of confirming that the email address they're using for you is valid. (In my case, it's the one I list on my IMDbPro page for professional purposes, so if it weren't, I'd definitely be doing this "self-managed actor" thing wrong! But that's not the source for everyone, so it's a valid question to consider.)

In my aquaintance with collectors, no matter what their area of interest, the qualitative and quantitative properties of what they collect, of what makes a particular item worth including and what doesn't, is a highly idiosyncratic thing. I can easily picture the autographs of obscure public figures having a place in the collection of someone for whom the act of collecting itself, of organizing and cataloging, is the point. There are social interactions in both contacting celebrities (or even not-so-celebrities) with requests as well as in the collector community, which, as a glance at the fanmail.biz forum or the Google results for "my autograph collection" will tell you, is a diverse and thriving one.

So I can guess at what's going on when I get that request in my inbox. But I don't really know, and (although I briefly considered asking this latest requester if he'd mind taking some sort of survey and passing it on to fellow collectors), it seems sort of rude and weirdly presumptuous to ask directly. If someone is writing to me saying "I'm a fan," I don't want to go essentially accusing him of lying.

Instead, I spent my latest vlog ruminating on the phenomenon, and inviting insights from the people who do the requesting. Whether any of them will respond, or even see it, is a total unknown. But what the heck, right?

Posted by Unknown at 8:53 AM No comments: Links to this post

Labels: autographs, the famous people are over there, vlog

Grieve not with thy bitter tears

In which our Diva commemorates a famous death

On this day in 1862, Elizabeth Eleanor Siddal died of a laudanum overdose. The inquest ruled it accidental; some who knew her claimed to know for a fact that she had taken her own life. We will never be able to confirm with absolute certainty what was in her mind that night.

We do have her poems, many of which dwell on death and loss, a tendency in which she was not alone among her contemporaries.

On this solemn anniversary, this one -- probably my favorite of hers -- seems fitting. It closes Unvarnished; I recorded this reading a few years ago.

Oh grieve not with thy bitter tears
The life that passes fast;
The gates of heaven will open wide
And take me in at last.

Then sit down meekly at my side
And watch my young life flee;
Then solemn peace of holy death
Come quickly unto thee.

But true love, seek me in the throng
Of spirits floating past,
And I will take thee by the hands
And know thee mine at last.
Posted by Unknown at 6:33 PM No comments: Links to this post