Wolfing out and Going Rogue

In which our Diva is having a very eventful costuming week

For several years I've been saying I should join Costumers With a Cause, in which a number of my friends were already active, and this past spring I finally did. Pretty much as it says on the tin, it's a volunteer organization of costumers/cosplayers who come out to interact with kids at charity and community events. Whether I'm Supergirl, Rey, or Merida, there's always at least one wide-eyed little one excited to meet their favorite, and the chance to make that happen and make it special for them is a feeling like no other. 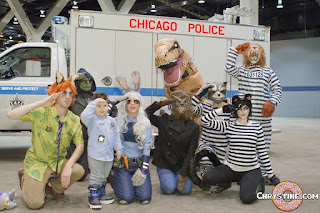 Yesterday's adventure was a little different. Last week, one of our organizers posted a call for "monsters" for a little boy to "arrest" as part of his day as a Chicago police officer, organized by the Make-a-Wish Foundation. We've partnered with them for past wishes, but this was my first chance to be involved, and I eagerly volunteered to come out in a werewolf mask I picked up at a con a few years ago but had yet to use. As the planning continued, it became clear that what 3-year-old David meant by "monsters" was the "savage" animals in his favorite movie, Zootopia. For those who haven't seen it, it's about a rabbit who becomes a police officer in a city of "evolved" animals, where a rash of citizens reverting to their "savage" instinctive behaviors turns out to be a political plot to sow fear and mistrust between prey and predators. Pretty complicated stuff for Disney animation!

With that in mind, my wolfy alter ego joined several other "monsters" in getting rounded up by the newly sworn-in Officer David. That was a lot of fun, and he loved it, though I'm pretty sure the chance to drive the Chicago Police bomb squad's remote-control robot was the real highlight of a day filled with real-life police coolness, including tours of various vehicles and meeting K9 officers and police horses. Our furry butts may have stolen the spotlight for a little while, but they really made the day happen!

In the course of planning, legendary voice actor Maurice LaMarche, who voiced the Godfather-like Mr. Big character in Zootopia, got wind of the project, and recorded a special message for David. Check out his reaction:

It was an amazing day, and quite a diversion in a week that has been -- unsurprisingly if you know me -- All About Star Wars.

It all kicked off last Saturday evening, when I was invited to appear as Rey at the Blue Box Cafe's Star Wars night. That also happened to be the night of our first real snow of the season, so it was lucky for me they're very close to home. Attendance was light, but enough brave souls came out to have a good time and a lively discussion on Live at the Blue Box. You can find them on your favorite podcast app, or watch the whole livestream on YouTube:

Anybody who knows me knows I can talk for days, so I was right at home. :-) Hopefully they'll have me back sometime! 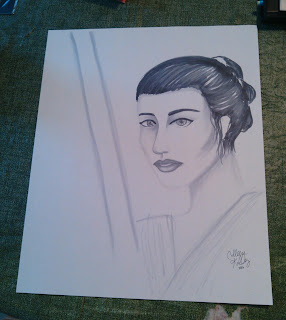 Then on Monday night I got back into Rey mode to try my hand at another new experience: Live modeling for artists, through Mistress Bones Portrait Playhouse. They host "Drink 'n' Draw" events at three different locations with a monthly theme, and this month is, of course, Star Wars. I met some great people, got a taste of holding an extended pose to bring into performing Unvarnished (though brandishing a lightsaber for 20 minutes is nothing like spending hours in a tub of water!), and looky looky what one of the artists gave me! <3 p="">

They have one more Star Wars event scheduled, next Wednesday (December 21) at Emporium Arcade Bar in Chicago.

These nights are FREE (with a suggested donation), and some supplies are provided. So bring your drawing hand and give it a try. I'll certainly be back for future themes - stay tuned!

And finally, tonight's the night! Rogue One: A Star Wars Story hits the screens, and I'll be on hand, this time as Mara Jade, at the Hollywood Palms Cinema in Naperville, alongside some very talented friends from the Chicagoland costuming community as well as the jaw-dropping talents of the 501st and Rebel Legion. There may still be some tickets available for tonight's screenings, but the lobby event is FREE from 6-9:30 pm. So come out, say hi, and get photos with a whole array of Star Wars characters from throughout the history of that galaxy far, far away. 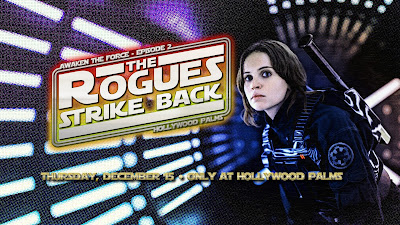 Hope to see you there!

Posted by Unknown at 9:09 AM No comments: Links to this post

Labels: adventures in cosplay, all in a good cause, costumers with a cause, geekitude, star wars
Newer Posts Older Posts Home
Subscribe to: Posts (Atom)