The Boy Who Looked Suspicious

In which our Diva's life imitates art imitating life

Yesterday I had the privilege of watching this brilliant young actor share a scene with veteran powerhouse Kelsey Grammer.

Rotimi Akinosho is a soft-spoken, engaging young man who's "still getting used to" being recognized on the street. As extras, anyone who wants to keep working knows to respect the actors' space and working process, and it's understood that we leave them alone unless they address us. Sometimes that's an awkward dance, like during yesterday's rain-enforced downtime, when twenty extras were instructed to gather in a building entryway where Rotimi's chair had been placed in the corner. He could have retreated farther into the building, but instead chatted with extras about his experience of the neighborhoods of Chicago, his college days at Northwestern, and how blessed he is in this role at the start of his career.

A couple weeks ago, I tweeted about looking forward to the impending return of Boss for a second season of production in Chicago, and was surprised by a reply from Rotimi -- who I hadn't even known was on Twitter -- that he was looking forward to being back too. Yesterday, between takes, he shook my hand and told me it was nice to meet me in person. He's down-to-earth, smart, and incredibly talented, and I look forward to watching him grow and continue to succeed.

At one point, the scene called for Rotimi to pull up his hood as he walked away, a perfectly sensible action on a rainy day.

And as this slight, baby-faced figure in the hoodie walked by, my stomach lurched. Because on another street, on another rainy day, unprotected by the bustle of a television crew and security detail, another bright young man's promising future was extinguished by a bullet.

As I drove home last night, there was another lurch, as a BBC World Service anchor quoted President Obama saying that if he had a son, he would look like this. The media and public discussion swirling around the Trayvon Martin tragedy is grappling with a dozen complicated and interlocking demons of the American social psyche, which will take months if not years to untangle and properly name, let alone really address. Many are how-could-this-happen?? shocked, while others are bitterly unsurprised, only heartbroken that it cost this teenage boy's life for the world to even begin to notice the minefield their children face every day.

In early coverage of the case, we were told George Zimmerman had stated that he thought Trayvon was "suspicious" because he was walking slowly in the rain with his hood pulled up. Earlier this week, I had to wonder what was going through the head of Zimmerman's attorney when he let his client publicly assert that this beanpole kid, armed with nothing more deadly than sugar and caffeine, attacked a stranger with ten years and a hundred pounds on him. Where on earth that line of defense is leading, only time will tell, but one thing is certain: They're banking on the justice system to believe it, and not without reason.

Black male in a hoodie. In any movie, TV show, or even advertisement, it's shorthand for shady dealings, gangs, drugs, violence. Even in a sophisticated context designed to subvert or deconstruct the trope, it works because the trope is already there. And where pop-culture images go, public perception follows. A casually dressed black guy can never be just a casually dressed guy. On Wednesday, a grass-roots "Million Hoodie March" took shape in street demonstrations and online solidarity. One of those posting a picture for the latter was Elon James White, creator of the satirical webseries This Week in Blackness. As he recounts on Tumblr, this resulted in a commenter objecting that "This is a thug in a hoodie" and that it confused the message. The photo, of course, is of White himself, and you can see at the link above how the dialogue played out. And you can bet the farm that the commenter -- who did not back down from their original position -- would have said no such thing about an image of a thirtysomething white guy wearing the same casual outfit, facial hair, and appropriately sober expression.

On Boss, Rotimi's character, Darius, is by no means an upstanding innocent. Neither is he simply a "thug," though it would be easy at a glance to label him as such and write him off. There's a reason we first met him as the worried caretaker of an elderly uncle. Boss is a grim show, committed to throwing a harsh light on the worse angels of our nature behind the gloss of political maneuvering, rife with racial tensions and moral corner-cutting. I have to admit it's not something I'd regularly watch on its own considerable merits, if it weren't the proud flagship drama of Chicago's growing TV industry, produced entirely here and well stocked with local talent and crew. It's a little too grim for my taste, but I'm still glad it's here.

And when I watch the scene we shot yesterday, I'll be thinking about that hoodie, and what the costume designer knows perfectly well it symbolizes. And watching for how the visual code plays out, for Darius, and for Rotimi, and for a nation of young men with their lives ahead of them.
Posted by Unknown at 9:09 AM 1 comment: Links to this post

Labels: extra extra, hollywood midwest, in the news, television is not furniture

The stuff of fairy tales

Still a zillion things going on, and my brain is too busy to organize them into a post that makes sense, but I just had to share this bit of gorgeousness. 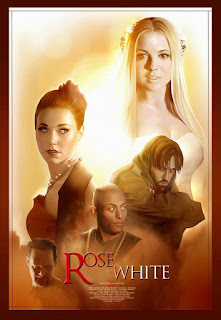 There's been a flurry of activity on the Rose White publicity front this week, leading up to the trailer expected to be released in the next few weeks.  I've seen a rough cut of the film, and couldn't be more excited to be part of it. I really think it stands out as unique in the current indie film landscape, and have high hopes that it will take the festival circuit by storm. Even better, it comes from a savvy team who know that it's not enough to just make a great film -- you have to get eye-catching suppport materials out there and spread the word too.
Enter Dennis Willman of Iron Dead Studios, who's created this amazing poster in the best fantasy-movie tradition. Just blown away.
Posted by Unknown at 8:56 AM No comments: Links to this post