When the sun is shining differently

In which our Diva seeks musical inspiration yet again 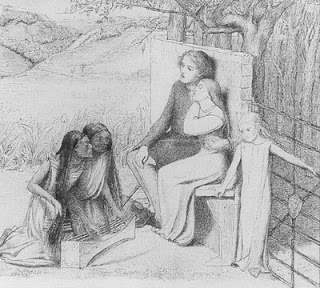 A friend recently pointed out a curious thing about the Pre-Raphaelites as a group that should have been obvious, but which had never occurred to me: None of them really cared a fig about music. They drew or painted people making and listening to it, and DGR drove people nuts by humming constantly while he worked, but they didn't think of it in the same artistic terms as the disciplines where they made their mark: painting, poetry, design.

Which hasn't stopped a variety of recording artists from being directly or indirectly inspired by them. The second half of Kate Bush's Hounds of Love is a mini-concept album called The Ninth Wave, with a secondary album "cover" intentionally based on Millais' Ophelia. Broadway star Rebecca Luker's last album features a lovely setting of a Christina Rossetti poem. And if you've ever seen or heard Loreena McKennitt, well.

The voice of my Lizzie is coming more easily as I write, and as with many characters I've played, I've assembled a playlist for her. Because unlike the PRs, I am very much a musical creature! Like the show, the playlist is a work in progress, and will probably shift a lot by the time I'm ready to put this baby on stage. (And suggestions, if you have them, are always welcome!) But for now, this is what I'm writing to.

I didn't set out for quite so much of it to speak to her relationship with Gabriel, since part of my intention has always been to bring out her own point of view, which history has tangled so inextricably with his. But then she did that herself to a large extent, and I'm finding my way more to acknowledging and dealing with that, while keeping the story very much hers. It remains to be seen if I succeed.
At least one of the above is equally applicable to the Lizzie and Gabriel of the BBC's rollicking and gorgeous Desperate Romantics, as evidenced by this fan-made music video. Inspiration abounds!

Posted by Unknown at 8:05 AM 4 comments: Links to this post

Eventually I'll hire someone to do this who's better at it than I am, but in the current economy, it's good to be a geek. :-)

Posted by Unknown at 10:23 AM 2 comments: Links to this post

In which our Diva has rather a wide range of projects

Ooops! I really didn't mean to go nearly a month between posts, but I got really busy with auditions and geekiness. The latter involved getting ready for and attending Wizard World Chicago Comic-Con and Dragon*Con, both of which were ridiculous amounts of fun.

Now they're done, and I've emerged from my sewing room to find that Cyrus: Mind of a Serial Killer will be screened at the Chicago Horror Film Festival, September 24-26. The movie will be shown on Sunday evening, and is up for several festival awards. After all the pouting I've been doing about not being able to make it to the other events where it's screened (okay, I'm still going to pout about London!), I'm seriously stoked to get to see it on a big screen locally! If you come out for it, I'd love to chat at the event.

With other projects taking precedence, I've only just now finally edited my video diary for Storefront Shakespeare's production of A Midsummer Night's Dream this past June/July. If you thought that bunch was crazy onstage...

Special thanks go to the lovely Emma Wallace for kind permission to use her song "Pet (Helena's Lament)." I discovered her through our director, Nora Manca, and just love her "modern ragtime" style. Be sure to check it out! And don't miss her blog, where she frequently offers free "song sketches" to fans.
Posted by Unknown at 12:52 PM 4 comments: Links to this post