Long, long ago, when woolly mammoths roamed roamed the wilds of the information superhighway between the glittering GeoCities and the gates of AOhelL (which one reached by means of shiny wheels that appeared by the dozens in one's physical mailbox), yours truly created a section of her personal website called "Doubt Thou the Stars Are Fire - An Ophelia Gallery."

Through the magic of the Wayback Machine (and a temporary change in my display resolution - raise your hand if you remember SVGA being fancy!), I can give you an idea of what it looked like: 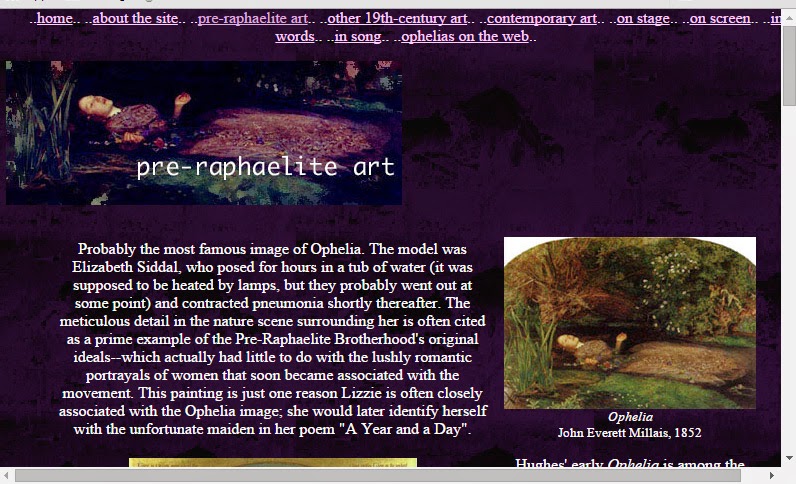 Also thanks to the Wayback, I can quote my long-forgotten "about the site" statement:

I had no idea it was going to get this big.

This project was originally conceived as a page for my Fireside Tales section [that was where I used to blather about fairy and folk tales before discovering blogging], but it wasn't long before I realized there was far too much material to fit in that context. It began (as so many things seem to) with Shakespeare, and with the familiar figure of Hamlet's poor tragic lady-love, who is driven mad by the madness going on around her, and who drowns in the brook with a song on her lips.

The next ingredient was my long-standing fascination with Pre-Raphaelite art, and with the circle of individuals who produced it. Ophelia was a favorite subject of theirs, as you'll soon see if you didn't already know. At one time I had notions of doing a website on the Pre-Raphaelites, but the lovely folk at WebMagick and The Germ have covered the subject far more thoroughly than I ever could.

The final catalyst was reading Mary Pipher's Reviving Ophelia: Saving the Selves of Adolescent Girls, a standout amid the recent flood of pop psychology and women's studies. To Dr. Pipher, Ophelia is the symbol of the loss of identity that so often strikes girls as they reach adolescence and are pressured to define themselves by everyone's standards except their own.

As you'll see throughout this site, Ophelia has far more faces than those few. She is a potent identifying figure for women in general and teenage girls in particular, and she means something a little different to everyone.

"This big" might sound funny in the age of blogs and content management systems and wikis (if I were to undertake such a project today, it would totally be a wiki!), but in the Wild-Digital-West days we prided ourselves on hand-coding HTML, which was actually the easier way to make something look the way you wanted than the clunky web-authoring software of the time!

So there were quite a few hours and a lot of love in that handful of pages, gathering art, photos, essays, and links to people, businesses, and pets bearing Ophelia's name.

Then came blogs and wikis and aggregators, and a far wider and more populous online world, and it all became far too much for one busy woman to keep track of. The links became outdated, and the subject became amply covered in multiple elsewheres. So I retired the site, and moved on to other things.

I still think often of poor drowned Ophelia, of course -- I could hardly help it even if I wanted to, up to my eyebrows in dramatizing a woman whose legacy is inextricably bound up with her. I still have the ghost of that "I need to add this to the site" impulse when I encounter a new expression of our enduring cultural fascination with her -- Emilie Autumn's tour de force album Opheliac; or a chamber opera entitled Ophelia Forever that features not one but three incarnations of the title role; or even a contemporary art piece involving a recreation of Millais' painting in bacteria, time-lapse photography of its decay, poetry collected via voice mail, and a musical composition based on the genetic code of digestive flora!

I think of poor drowned Ophelia, and also sweet hopeful Ophelia, and mad Ophelia struggling to make herself heard through old words and melodies and the language of flowers. I think of the reality of an old ballgown turned gossamer flotation device and glittering anchor by turns. I think of a role that can liberate or imprison, or paradoxically do both at once -- for Lizzie, one of its most famous exponents, or for unknown dozens of young actresses taking her on at any given moment.

I've never played Ophelia myself (barring reading from our desks in a high school literature classroom), and I've passed the "ingenue" phase of my Shakespeare career and into the "queens" -- though, despite having dived headfirst into Titania and Lady Macbeth, I somehow don't feel ready to tackle Gertrude. But she remains there in the background, somehow, well past the adolescent confusions in which one is supposed to identify with her.

For a fictional girl who didn't make it out of her teens, Ophelia really does contain multitudes. Like many characters, really, especially those of whom we learn tantalizingly little in their moments on the stage. Those whose shadowed lives we can illuminate with the experiences and questions of our own.

It's with this role I begin Unvarnished, with Lizzie offering a few typically wry observations hinting at how it has touched on the corners of her own life. A glimpse:

Three years ago, I witnessed in person the sensation Millais' Ophelia still creates in those passing her on the Tate Gallery wall. Lizzie was part of making something magical, whose appeal is impossible to quantify. Yet her experience of its making involved entirely earthly and practical considerations of cold water and needed wages. If anything encapsulates the contradictions of her life, that's it.

The music opening the above video is from Helen Trevillion's "The Goose Girl"
Posted by Unknown at 5:35 PM No comments: Links to this post

I've been bitten by the vlogging bug. (Well, technically I can call myself an early adopter -- all of these predate my even hearing the term "vlog" -- but it's way easier now.)

For those of you who prefer the written word, don't worry -- I still plan to do proper blog posts too! But thoughts come out differently in writing than they do in speaking, and of course once the Unvarnished process is more visibly underway, this way of sharing it should be even more fun.

I started simple today, with a few thoughts on why I'm so fascinated by Elizabeth Siddal and what inspired me to create a solo theatre piece about her. If you've been reading this blog for a while, you've probably encountered most of these thoughts in one form or another, but I wouldn't mind your giving a listen even so. And, if you're so inclined, sharing with potentially interested friends? :-)


Posted by Unknown at 2:50 PM No comments: Links to this post