If I had a million dollars

In which our Diva displays her preference for experiences over stuff, though stuff is nice too

If I had a spare few hundred bucks lying around: 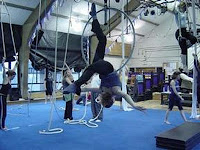 When I designed costumes for Barnum a few years back, I got to participate in one of the circus workshops arranged for the cast at The Actor's Gymasium. A. Maze. Ing. I've wanted ever since to do a full session of their aerial class. I'm still determined to get the knack of wrapping my feet in the Spanish web so I can actually climb up to the loop and play. I did have a great time on the lyra, though, and also discovered that I do in fact still have my 180-degree split -- by being hoisted seven feet off the floor that way!  They're also affiliated with Lookingglass Theatre, one of the companies at the vanguard of physical theatre in Chicago.

If I had a spare grand or so lying around for airfare and lodging, I'd be headed to London in October for the UK premiere of Cyrus: Mind of a Serial Killer at the Gorezone Film Festival. (Despite the topless promo photo of one of the emcees at the top of their webpage.) I love a good horror weekend anyway, it'd be all kinds of fun to do the whole red carpet thing, and I could visit with friends in the UK. My role in that is, of course, too minor for them to send me anywhere, but I'm still holding out hope that there will be some kind of event Stateside that I could go to. Apparently it's already out on DVD in Australia (a couple blog reviews have popped up on my Google Alert), and I'm hoping to get a copy of it soon.

If I had a spare three or four grand, and the ability to take a month off besides, I'd finally go to Shakespeare & Company's full Intensive program. I learned so much just in the couple weekends of theirs I've done -- one in 1995 and another in 2001 -- that's still very much at the core of my actor's toolbox.

Of course, spare cash lying around is, as for pretty much everyone else these days, not so much something I have. I'll just have to make do with playing one of my dream roles in an exciting production with a brand-new theatre company. Darn. ;-)

Song for today: Been running through my head, and inspired this post. Which, considering I've been neglecting this blog for a couple weeks for lack of inspiration, is a darn good thing.

Gotta say, though, I have several real green dresses, and I don't think there's anything cruel about them. ;-)
Posted by Unknown at 11:01 AM No comments: Links to this post

That kind of woman

Brought to my attention by our Midsummer director, who also happens to be an Old Hollywood aficionado as well as the host of the "Sunday Standards" radio show. Quoth she, "Titania is very much that kind of woman."

Clearly I'm going to have to check out more of this Emma Wallace person. Love the song. And love how many times Cyd Charisse in that green flapper number from Singin' in the Rain  keeps popping up in the vid.

I hope my Titania achieves half the glam of these ladies!
Posted by Unknown at 11:15 AM No comments: Links to this post

In which our Diva has a signal to boost

Melissa Silverstein at Women & Hollywood has been tracking developments in the lineup at this year's Cannes Film Festival, at which not a single film directed by a woman is in competition for the Palme d'Or. (If this doesn't immediately strike you as a problem, W&H is a great place to start reading up on why it is.)

She's by no means alone, and now British-based filmdirecting4women is organizing a petition to point out to the festival powers-that-be that this is a pretty appalling state of affairs.


We are raising our voices in protest in hopes that in the future this will never happen again.

We are watching. We will not be silent.

Please take a moment to check out their website and the cool T-shirts they're selling, and if you feel so inclined help spread the word on your blog/Twitter/etc. I know it's "just movies," but it's also part of the larger conversation about the value of women's work. And that conversation isn't going to be over any time soon. I hope you'll join in.

Posted by Unknown at 6:02 PM No comments: Links to this post