My knowledge of kaiju and its fandom is, generously speaking, scanty. I've seen the original Godzilla and whichever movie has the teeny little sparkly twins, and probably bits and pieces of some others, many many many moons ago. I think I might be able to identify three monsters on sight.

So how, you may very well ask, did I end up on a panel at G-Fest yesterday afternoon? 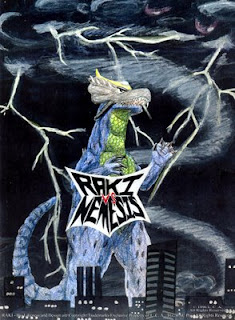 Well, about twelve years ago, I answered an audition listing in the Columbus Dispatch, and wound up with my first on-camera experience in this little movie. When I say "little", I mean "these guys give 'guerrilla filmmaking' a whole new meaning." This being before a middle-class joe could pick up a digital camcorder at Best Buy without taking out a second mortgage, they shot entirely on VHS (no, they don't do that anymore!), in Austin's living room, his aunt's basement, and (thanks to a very tolerant management accustomed to hosting Marcon and Origins) various locations around the Hyatt Regency Columbus.

It was a lot of craziness, a lot of fun, and the end result -- obvious production-value issues aside -- was surprisingly not too bad. (I would also like to note that Austin is the one and only filmmaker I've ever worked for who came through promptly with both my copy and my contracted salary.) But until yesterday, I believed that nobody who wasn't involved in the production had ever seen it.

Bzzzzzzt! Turns out this weekend is the tenth anniversary of its first screening at G-Fest. And not only have people seen it, they liked it. A lot of that is because Austin is pretty well known in American kaiju fan circles for building really cool monsters. Also because he and Jeff have spent a lot of time and trial and error learning (and inventing a few of their own) lighting and how-to-use-found-objects tricks for making miniature sequences work. But also because there's just something about the way they do things that seems to capture the spirit of what people love about the genre. The con chair is very supportive of TG2WAC's endeavors, and plugs their stuff right in there with the real Japanese classics and the far-better-funded fan films.

So, on a very small scale, I got to be a movie star for an afternoon. I even had a couple kids ask me for autographs. And I'm in the Raki booklet! Even though it comes with a later movie (the only one the guys have available on DVD so far because it was their leap into digital) it has details on all four, and notes that I'm a "highly accomplished stage actress" -- hee! -- and that I "eagerly" contributed to the fight work. Which is quite accurate. Fun times, man.

I think I might actually head over for a full day next year. I'm kinda sorry to miss meeting the original man in the suit.
Posted by Unknown at 8:50 AM