Dracula promo photos and other fun 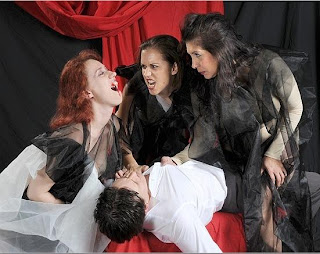 Ported the selection from GreenMan's Facebook group over to MySpace here. (My profile is set public, so you shouldn't have any trouble.) And the GreenMan website has been updated with some more.

We have a great cast, and are having a great time. Not least because of the unusually high geek quotient: Mina does SF and horror reviews and interviews for online video and radio, Lucy is a LARPer and costumer, Seward and Van Helsing are having an ongoing comic T-shirt duel, and pretty much everyone has participated in breaktime discussions on comics, Star Wars, and LotR topics.

Poor Drac got a quick-and-dirty fang fitting for the photo call -- not what will be worn for the show! -- which led to a forlorn and murky "How are you guys doing that?" when Lucy and I were chatting merrily away because we had each brought our own. I'm sure she's had as much practice as I have with articulating more on the tip of the tongue (not that the suggestion meshes well with the dialect he's still refining), but I also reassured him that he shouldn't have to deal with as much stuff behind his teeth as he had that day. One of those things you don't think about until you have to do it! You'll often run into people who say "Oh, this is how they do it for the movies." Which sounds fine and dandy, until you remember that pretty much all the dialogue you hear when someone is vamped out onscreen was done in ADR. We, er, don't have that option in live theatre. It's a bit more of a challenge! :-)
Posted by Unknown at 9:35 PM

Labels: onstage in the burbs