In which our Diva is in Career Development Mode
I always feel a little antsy when I don't have any Exciting News!! or Crunchy Process Goodness to post about.  Which is a bit silly, since it seems unlikely that anyone outside of my immediate social circle reads this blog anyway.   But hey, maybe you're reading this at some future point when I am That Chick From Those Movies and you followed some links out of curiosity.  Or maybe you're a fellow dreamer-and-doer who's stumbled across my meanderings and found a kindred spirit.  (If so, hey, shout out!  Support networks are made of win!)  Or maybe nobody's reading it at all, and that's okay too.
The lack of Crunchy Process Goodness makes me antsier than the lack of Exciting News!!, because I'm very much a believer in the notion that an actor should always be doing some kind of acting, be it performance-oriented or training or whatever.  I've done several film auditions lately, but that's pretty much it -- on the craft side.
What I've mostly been doing instead (around the mortgage-and-groceries-driven reality of Office of Doom)  is That Other Stuff most of us hate.
I knew long before I started reading casting director Bonnie Gillespie's fantastic weekly Column "The Actor's Voice" that the self-promotion portion of an actor's job never stops.  But man, it's  nice to have that weekly kick in the pants of "So do it already!!"  To that end, I made a commitment at the turn of 2009: No auditioning for theatre until I have my website and representation ducks in a row.  The goal was to get the site up and submissions out to two or three agents before the end of January, and then maybe think about committing to three or four months of rehearsals and performances.  Because, whatever my intentions at the outset, That Other Stuff just never ever gets done during a show process.  Ever.
The funny thing is, once I got going, I've actually had a great time, and might even make that goal.   It helps that I have a rather broad DIY streak anyway, but darned if it hasn't also just been fun.  I finally swallowed my "only hand-coded HTML will do!" geek-girl pride, accepted that I'm not going to get around to learning to build CSS from scratch in the foreseeable future, and went down the dark path of canned Joomla! templates.  And the results aren't half bad, if I do say so myself.  There's plenty more to do, of course, but for starters, it made me finally write a proper PR bio (have I mentioned I hate writing bios?), with the side effect of having said bio punching up my IMDb page too. 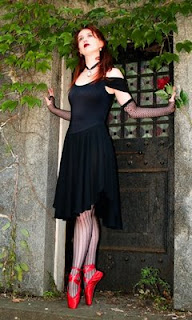 I still have lots of theatre photos to scan in, but for now there's a sampling of the fabulous ones Ken Beach took at the final dress for Dracula.  Probably most time-consuming was going through many hundreds of shots from three photo shoots for the "Publicity" folder.  Which is arguably the most frivolous area of the site.  But y'know, when you're not a big star or model material, and you have a documentedly problematic relationship with still photos of yourself?  It's a nice shot of confidence to not only have, but have put together yourself, a decently professional, polished presentation of some really cool ones!  Shoutouts to photographers Todd Jackson, David Grelck, and Mike Smith, with thanks for making that possible by actually asking me to pose for them!  (Also glad that, unlike my outdated HTML, my Photoshop skills have stayed in good form.  Never underestimate the importance of cropping and color correction in the digital age.)
Still on the agenda: Editing reel material and authoring a suitably professional DVD, so it's ready to send out to agents and casting agents when they ask for it.  (Which requires me to get resumes and cover letters out to them first, which is happening THIS WEEK.  You saw it here first -- don't be afraid to hold me to it, even if we've never met!)  This is helped by the prompt receipt of my copy of a recent student film by Devan McGrath, who gets a thumbs-up shoutout for professional communication, a fun but efficient set, and did I mention actually sending copies to actors, all in refreshing defiance of every horror story you've ever heard about working in student films.  :: blows kisses to Mal Corazon compadres ::  Watch for clips from that and The Cancer Jean on my website, my Actors Access profile, and assorted other places I should have had video up ages ago.
Dreaming-and-doing actors?  We don't have the money.  We gotta MAKE the time.  Do it.  You will not be sorry.
Posted by Unknown at 9:43 AM

There ARE people everywhere reading your blog.

Cyberkim, you just made my day! Thanks! :-D

Hi! I also read this post. I'm sympathetic on all That Other Stuff.

(Which requires me to get resumes and cover letters out to them first, which is happening THIS WEEK. You saw it here first -- don't be afraid to hold me to it, even if we've never met!)

So, what about those res/cover letters? *g* Holding you to them!