Rehearsal for The Storm (working title of the HD short I mentioned the other day) rescheduled due to a family emergency for the director.  I'm eager to get to work on it, but still a little relieved -- check out the view from my back door to see why: 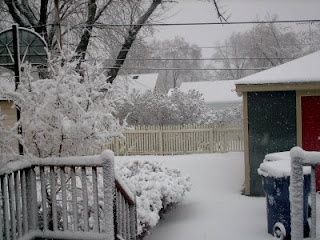 Still have to venture out for an audition later, unless they decide to reschedule too.  Which wouldn't surprise me a whole lot -- it's in the Loop, where they have six inches and still falling.  Chicago is situated such that the full brunt of lake effect is mostly on the South Shore in Indiana, and up toward Milwaukee.  We've gotten spoiled in the last couple weeks, but there was bound to be a last gasp of winter still coming.  Hopefully this is really the last!
Song for today: "Little Toy Gun" by honeyhoney.  Fun video directed by Kiefer Sutherland.  First song going on the playlist for Blue.  I don't always do them (last one was the "Vixen Mix" for Dracula, which was a big hit when I burned CDs for everyone), but this character really calls for one.
Posted by Unknown at 9:16 AM