June is bustin' out all over

Hey, what's that shiny round thing in the sky? *g* I was joking on Facebook yesterday about building an ark, and an old college friend pointed out that God promised never again to make it rain for 40 days and 40 nights, but nobody said anything about 39. Thankfully, it was only about five. And the thunderstorms yesterday were spectacular! There's just something about them that always makes me happy.

Plenty going on, but mostly continuations of stuff I've already blogged about. Tonight is my maiden voyage as a "Ghost Host" for Historic Ghost Tours of Naperville, and I've been stuffing my head with the facts and fancy of the town's hauntings. Still need to shop for good sturdy summer walking shoes -- really don't have anything right now that will take me through the season. 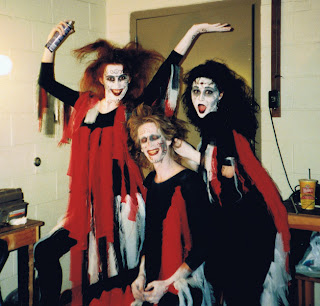 Earlier in the week I updated the photo gallery on my website, including blast-from-the-past theatre pics and stills from recent film projects. I've been meaning to scan some old photos, both professional and personal, for ages and ages, and it was fun to finally get around to it. Of the theatre ones, I think my favorite has to be the Witches goofing off in the dressing room before a performance of Macbeth at Rosebriar Shakespeare Company in 1994. Good times, man. The headshots I added are still in the proof stage, but I'll have my shiny new marketing materials in hand in the next couple weeks, and then it'll be time to get some more agent mailings out.

We've now had a table read and some great discussion for One Night, and I'm grooving on the way Sebastian, the writer/director, thinks and works. There are plans in the works for at least one actual rehearsal of my scene before we shoot in July, which marks the second time I've had that luxury with a film. (The first was The Storm, which really couldn't have done without it since so much of the interaction was nonverbal.) He's also keeping the actors filled in on the business plan for his production company, which I've never run into before, and which really makes me feel like I'm getting in on the ground floor of something special that could really go somewhere. I know there are no guarantees, but for now, there's a great energy in that. Giving life to Sheila the waitress is that much more awesome when I can feel how excited everyone is about this project and where it could go.

Meanwhile, on the singing end, things are coming together for Elgin Opera's Summer Music Festival, which promises to be a great time. It's an ambitious undertaking -- a different concert each weekend throughout July -- and it comes hard on the heels of the annual voice competition (which I decided not to do this year after all -- too much stuff going on, and still transitioning into bigger lyric soprano rep, so I just wasn't going to be ready). I'll be checking out the finals next weekend with an ear on the musical theatre numbers, to help plan the Broadway Night program. The website and Facebook page will be updated soon with more details on the July concerts and master classes.

Oh, one more thing: I won't be performing at this year's World of Faeries festival, but I did promise I'd ask around. It's a fun time, and I still say my best review to date was the small child last year who declared that "some of them are just pretending, but the purple fairy is real!" They're looking to cast a couple dozen interactive performers, so if you're in the Chicago area and think you might be interested, drop me a line and I'll get you in touch with the guy you need to talk to.

Back to studying spooks!
Posted by Unknown at 2:42 PM