A few of my favorite things

In which our Diva has been neglecting her blog again. Bad Diva. No cookie.

Watch: Being Human, the BBC series that sounds like the setup for a joke -- a werewolf, a vampire, and a ghost share a pink house in Bristol -- but is in fact one of the more brilliant things to hit my TV in years. Anyone who knows me knows that my favorites list has always included various supernatural dramas, but the main thing that sets this one apart is its intimate scope. No Chosen Ones, no cosmic prophecies, no apocalypse-of-the-week. Just three people who happen to have some extraordinary problems, building their own weird little family. Even when they do inevitably get caught up in larger circumstances, the focus remains on protecting that family. Saving the world is a bit out of their league, just as it is for the rest of us. 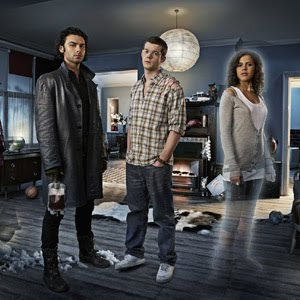 Like all good fantasy, it isn't really about monsters. It's about how life is frequently and drastically unfair, but we find ways to make it worthwhile anyway. And how what really matters is looking out for the people we love. The three mid-twenties stars -- Russell Tovey, Lenora Crichlow, and Aidan Turner -- are individually superb, and collectively a perfect storm of ensemble chemistry. And creator/writer Toby Whithouse (who has written, among other things, the milestone "School Reunion" episode that reintroduced Sarah Jane Smith to the revived Doctor Who) has a knack for defying cliche, and for acknowledging the absurdity in dramatic situations without lessening their impact. For those on this side of the pond, BBC America has already aired the first season, and has announced plans to run the second (which has just finished in the UK) and third (which will be starting production soon).

Eat: It's the time of year again for my two greatest vices: Cadbury's Creme Eggs and Thin Mint Girl Scout cookies. I've already stocked up on the former, stashing boxes in odd corners of the freezer to be rediscovered throughout the year. The latter have thus far eluded me. At this rate I'm going to have to start going from grocery store to grocery store until I spot a table of earnest little girls. I need my fix!

Read: Currently I'm in the middle of Derek Parker's lively biography of Nell Gwyn, the most famous mistress of the famously randy Charles II. It's unpretentious, full of all kinds of cool incidentals about Restoration theatre, and generally a very enjoyable read.

Listen: The other day, my mental soundtrack randomly started running Clara and Fabrizio's soaring duet that closes the first act of The Light in the Piazza, so I've been playing the cast album a lot. Still bowled over every time by the heartfelt performances and the utter beauty of the score. Still cry at two or three points every single time. If there's a "the" Broadway composer of this generation, Adam Guettel is probably it.
Posted by Unknown at 8:03 AM

Labels: historical geekery, musical theatre, song for today, television is not furniture, tell me a story, time to smell the roses

Regarding Girl Scout Cookies, I heard on NPR yesterday that this year, for the first time, they're allowed to sell online. So you may find an enterprising troop in your virtual neighborhood, as well as your local grocery store...

Oooooh! Thanks for the tip. (And hooray for NPR!)

I have been curious about "Being Human" since I first heard about it a while ago. Just one more reason that I wish the BBC could magically replace most of the American crap on right now.

Also, if you're feeling adventurous, I had this linked to me: Homemade Girl Scout Cookies: Thin Mints.

I really need to give Light in the Piazza another try. I saw it in its pre-Broadway try-out at the Goodman several years ago and while the music was lovely, I was quite simply bored by it.

Me + baking = scarier than any resident of the pink house. ;-)

Seriously, thanks for the link! I might have to give it a shot. Though Keebler Grasshopper cookies are a reasonably passable substitute too.

I've heard very mixed things about the Goodman production of Piazza. I watched the Live From Lincoln Center broadcast a couple years ago and really enjoyed it, apart from Katie Clarke's winceworthy upper register. Kelli O'Hara and Victoria Clark make the Broadway recording for me.