To dance our ringlets to the whistling wind

In which our Diva takes on one of her dream roles

That audition I was all cagey about the other day? Turned out very well indeed, and I shall be playing Titania in A Midsummer Night's Dream, the inaugural production of Storefront Shakespeare. 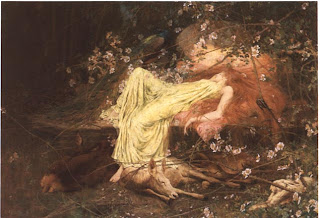 I'm excited about this for a number of reasons, not least because I've wanted to play Titania for ages. Fourth... possibly fifth? Time's the charm. The first opportunity was for Actors' Theatre of Columbus way back in 1995, and though I was ultimately not cast in that production, it was in reading the "forgeries of jealousy" speech at the callbacks that I fell in love with the role. It was just after I had done a weekend workshop with Shakespeare & Company, at which I learned more in three days than I would ever have thought possible, and I was all afire with the possibilities in the language. I also got a lovely handwritten notecard from the director thanking me for coming out, which is pretty darn cool as consolation prizes go.

There are all kinds of reasons I love that speech, which for me is the heart of the character, but one absolutely critical one is also the easiest to explain. It starts out as a bitter complaint about how everything is All Oberon's Fault, that no sooner does she light somewhere with her court,

But with thy brawls thou hast disturb'd our sport.

The catalog of nature gone awry that follows is some of the most vivid imagery in the canon, but somewhere along the way she reaches the conclusion that

this same progeny of evils comes
From our debate, from our dissension;
We are their parents and original.

Of course, this is a fairy we're talking about, so the latter doesn't necessarily stick. But I love that she's capable of it if she chooses, and the message that we share both power and responsibility for this world of ours. Even if we're not supernatural royalty whose mood swings literally affect the climate.

I've had quite a long Shakespeare drought. Except for understudying the Widow in The Taming of the Shrew a couple summers ago (when my attention was far more on designing the production's costumes), it's been almost eight years, since... Hey, what do you know? Another Midsummer at Actors'. In which I was really hoping for Titania, of course, but Mustardseed was fun, and I had a great time hanging out with a great company while getting eaten alive by mosquitoes.

I'm also thrilled by the energy and vision behind Storefront's genesis, as described on their website:

We live in a fast-paced, mobile society, accustomed to interactive media, in which our phones are computers and through our computers we can interact with people in real time on the other side of the world, and in which children grow up playing interactive video games. To truly engage a modern audience, theater can no longer be a completely passive experience. Our plays are staged with the audience right in the middle of the action so the people will feel that the play is happening to them. No longer passive observers, they are now eye witnesses to the story.

I've been friends with artistic director Nora Manca for a couple years now. I first met her at a cast party for a show I was in with her now-husband, and several months later we were cast as sisters in an ill-fated project I refer to as the slowest-motion train wreck in theatre history. It doesn't matter what the show was, because it never happened, but I met some terrific people through it. Nora's one of those people you can tell, after about five minutes of conversation, is going to do something really special. I'm delighted and honored to be part of its beginning.

And the timing is also great for pointing out that this Friday, Shakespeare's 446th birthday, is once again Talk Like Shakespeare Day, as declared by Chicago Shakespeare Theatre and Mayor Daley. Toss in a "forsooth" or two for me!
Posted by Unknown at 3:03 PM