The tightrope and the net

In which our Diva just doesn't want to be perfect

I saw Black Swan the other day. Like pretty much everyone else, I was blown away. Like Roger Ebert, I almost immediately wanted to rewatch The Red Shoes, something I haven't done in several years. That's partly because, though it's one of my all-time favorite films, it is -- for some of the same reasons as Black Swan, albeit not as intensely -- not always easy to watch.

(Here's where things get a bit spoilery, despite my best efforts to avoid it. If you haven't seen Black Swan and want to avoid preconceptions, stop reading and come back later. The post will still be here.) 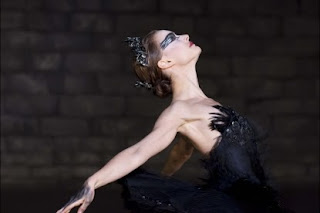 As Ebert's review notes, Black Swan harks back to The Red Shoes in ways large and small, almost certainly deliberate, and not least among them the ending. There's a critical difference, though: The Red Shoes' Vicky Page has a life -- romance, interests, independence -- and the film follows the domino effect of choices she makes to sacrifice all of that on the altar of her art. Black Swan's Nina Sayers, as the film makes painfully clear within the first few minutes, has never had such a life. She seems barely conscious that such a thing is even possible; her entire world is the theatre, the apartment she shares with her mother, and the subway ride in between.

In a way, Vicky has been fragmented into two characters: Nina and rival (?) newcomer Lily. I put that question mark there for a reason, one that I'm not seeing discussed very much. There's rumination aplenty on Natalie Portman's performance, complete with deconstruction of the sociopolitical ramifications of what she put her mind and body through to achieve it. There's commentary on the creepily controlling mother and domineering artistic director. And all that is undeniably interesting, and I could get into it, but I'd mostly be saying stuff that's been said elsewhere.

What I haven't run across, what I'm finding myself thinking about more and more in the day and a half since I sat staring, slightly stunned, at the closing credits, is this: Lily is the "black swan," the glamorous, insidious threat, because the drama playing out in Nina's mind -- and everything we see is through Nina's eyes -- requires it. And the more I think about it, the clearer it becomes to me that not only is Lily ill-cast in the role, but that she is in fact the one and only person in Nina's world who is not trying to co-opt her life.

To the extent that we can separate the actions of the real Lily from the hallucinatory construct who sometimes wears Lily's face and sometimes Nina's own (and there's a point or two where that remains ambiguous), the worst we can say is that maybe she wouldn't be making such an effort to befriend Nina if Nina weren't the freshly-anointed star. But it's also perfectly possible that she really just sees a colleague who's lonely, terrified, and in desperate need of a friend.

Lily's no angel, and we may well disapprove of her casual attitude toward drugs and sex. But while the "girls' night out" seems wild and utterly out of control from Nina's (and therefore the audience's) perspective, it doesn't take much thought to realize that she can't be doing that every night. She shows up reliably to work, dances well, seems to get along with pretty much everyone.

There are repeated assertions in the dialogue that Lily is charismatic and sexy because she's slightly "dangerous." This serves the point Thomas is trying to make about what Nina needs to bring to her Black Swan (and I find it curious that Odette and Odile are never referred to by name, but that's a ponder for another day), but I'm not convinced it's accurate. Lily is confident, healthy, secure. In a circus of extreme personalities, she's the unlikely poster girl for "everything in moderation." A concept so utterly beyond Nina's grasp that, through her increasingly fractured lens, it makes sense for Lily to be out to take away everything she has... which, at the end of the day, is pathetically little.

Nor does Lily have any need to do so, and it's this that Nina is particularly unequipped to understand.  The shape of the drama requires that Lily be named the alternate. But it says something else, too, something that gets overlooked but which is critically important in my world: She has achieved a level of professional success very nearly on a par with Nina's without sacrificing the rest of her life. (Whether she did it without resorting to the casting couch is an open question, answerable only by knowing the sequence of events outside of Nina's perception and whether a particular event within her perception actually took place.)

The myth sold to Nina all her life, the one that's been romanticized in fiction as long as we've had fiction, is that true art is possible only through sacrifice to the point of abject misery.

It's a lie. You can be an artist and be happy. Lily is living proof, embedded directly in this latest iteration (and, to a great extent, subversion) of the classic storyline.

As for the other principal figure required by this play of archetypes, the tyrannical, abusive genius pulling the strings? He's a lie too, not because he doesn't exist but because he isn't necessary or excusable. And there are clues in the characterization of Thomas that we're meant to take some subversion away from that too. It's not as clear, maybe, but I don't think it's an accident that it's Lily -- that same voice of moderation -- who states matter-of-factly that he's a prick, and voices directly to him her concerns about how he runs his rehearsals.  (Worth noting here are the stories Natalie Portman has been telling in interviews, about how Darren Aronofsky attempted to play her and Mila Kunis -- who've been close friends for years -- off as rivals, keeping them separate in ballet training and telling each that the other was "looking really good." But there's something in the amusement with which Portman relates this that makes me think Aronofsky knew perfectly well they would get together and compare notes, and that the whole thing was an oddly ironic game for all parties.)

Both of these myths -- told over and over again, and widely taken as truth by audiences -- are incredibly dangerous and damaging if an artist takes them at face value. Yes, we absolutely have to take risks. We have to sacrifice personal defenses and let strangers in where we fear to admit even those we love most. But there's a contract on both sides of that transaction, that the place we're taking that risk -- the studio, the stage -- will form the boundary of the storm, and that it need not rage beyond that boundary to wreck the rest of our lives. We have to trust those riding out the storm with us.

No genius, no results can excuse betrayal of that trust. There is no result that cannot be equally effectively achieved without such a betrayal.

All of which has tangentially reminded me of one of the reasons I adore Slings and Arrows, the acclaimed Canadian TV series about a beleaguered fictional Shakespeare festival. At the center of the series is artistic director Geoffrey Tennant, who knows a little bit about risk and loss in the name of art. That'll happen when you fall off the metaphorical tightrope and have a psychotic break in the middle of a performance of Hamlet, precipitated by failure of the two most critical strands of his net, his director and his girlfriend.

Seven years (the first several of them institutionalized) later, he winds up back at the same festival, inheriting in midstream the direction of another Hamlet. His Ophelia is a curious character named Claire, whose presence in the company despite her glaring lack of ability is never explained beyond "I think she's someone's evil niece." No one likes this woman, nor is there any particular reason they should. She's pretentious, gossipy, and smarmily duplicitous. If there were ever a situation where the audience would forgive a fictional director for launching a tyrannical tirade at a fictional actress, this is probably it.

Geoffrey does eventually reach his breaking point with her, and this is what he does:

Keep your spoiled-brat Lermontovs and Thomas LeRoys. I'm not impressed. This, my friends, is how the grownups do it.
Posted by Unknown at 4:11 PM

This is a wonderfully thought-provoking review of an important aspect that was completely ignored in the NPR review I head. Thank you for sharing your reflections. I hadn't been planning on seeing this film; I may reconsider.

It's absolutely brilliant, but extremely upsetting and often very difficult to watch.

If you haven't seen it, rent The Fountain for an antidote. Thematically unrelated, but equally brilliantly realized by Aronofsky and another amazing cast. It's a bit melancholy but stunningly beautiful and moving, and Rachel Weisz and Hugh Jackman are both at their very best.