Wholesome and good for most uses


A few years ago, a stage manager said to me, "You know, you're the most wholesome person I know." Before I could do more than smile, she followed it up with, "But I mean it as a good thing!"

Then, as now, I thought, what the heck does it say about us -- as theatre people, and as a larger culture -- that "wholesome" is presumed insulting until proven otherwise?

Now, I've got nothing against dark, violent, and/or morally slippery stories and characters in and of themselves. (As anyone who's known me for more than, oh, maybe 45 minutes can attest.)  What I am getting pretty tired of, though, is the cynical notion that these are the only stories worth telling in our imperfect world. The utterly threadbare, but still ubiquitous, belief that happy relationships, happy people, are inherently boring. That any apparent goodness in human nature must be fake, or foolish gullibility, or somehow self-serving.

The truth is, unrelenting "grit" and grimness isn't any more accurate a reflection of reality than unalloyed Pollyanna perk. And a philosophy insisting upon it is certainly not the be-all and end-all of depth or maturity. In fact, it's pretty darn adolescent in my book. And has been since I was an adolescent. If brighter stories don't hold the interest of your personal taste, that's fine, but the moment you start claiming some sort of moral or intellectual superiority because of it, I will laugh at you. A lot. (My lack of patience with snobbery of pretty much any kind is well-documented.) 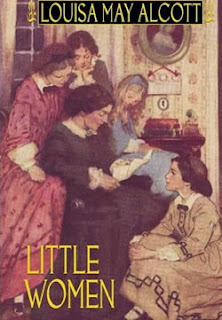 This topic pops up in my head every once in a while, and of course it's on my mind as I head down the tech week rabbit hole for Little Women. Not only a musical, but one based on a novel intended primarily for younger readers, published in 1868/69, in which the most violent act is the immolation of the only copy of a novel manuscript. There are no villains -- even the society girls and their marriage-conscious mothers, who would be shallow mean-girl caricatures in virtually any other hands, are defended in the novel's narrative as acting in good faith for reasons they mistakenly consider important -- and it would be easy to assume there's no conflict and therefore no story.

The truth is, there's plenty of conflict, among the adolescent March sisters and with the outside world, just on a subtler scale and with a lighter touch than our current culture has trained us to appreciate. Even our comic-book heroes are expected to be angst-ridden and "gritty" or risk being dismissed as cheesy, sentimental, two-dimensional. I hadn't realized just how tired I was of that until I was unexpectedly delighted this past summer by a recap of Captain America that (amid the hilarity) articulated perfectly why it was my favorite of the season's surfeit of comics adaptations:


Steve was chosen for the program because, as a physically weak man, he knows the power of strength better than anyone else. Steve says “Thanks…I think.” It‘s a good thing, Steve! I really like that these actors and the script can make this seem like it isn’t a hackneyed concept. A lot of reviews have discussed the nostalgia inherent in this film, and I think that’s true, but I also think that these ideas that seem nostalgic–earnestness, a desire to do what’s right, the lack of MISERY AND DARKNESS at the hero’s core that explains everything about who he is (Christopher Nolan’s Batman, my laundry hamper is not a good hiding place)–are just things that we’ve forgotten are actually good things as a society. Pop culture is so entrenched with characters that have ~dark secrets~, even the good guys, so somebody like Steve Rogers comes along and we don’t know what to do with him. I’m glad that the movie’s doing well and I’m glad that people are responding positively to him, because sweetness and light is not a sustainable course for films to take, but it really doesn’t hurt to have a hero you can get behind 100% every few years. You can’t get behind Christopher Nolan’s Batman 100%, because he’ll probably kill you in your sleep without even meaning to. That guy’s crazy.

Speaking of comics adaptations (although I haven't read the source in this case), The Walking Dead continues to get critical and audience accolades, and remains a fixture of Sunday nights in my living room. Talk about relentlessly grim -- a post-zombie-apocalypse storyscape whose creator has stated outright that it's about what the state of the world does to people. Throughout the second season, without getting too spoilery, I've gotten ever more frustrated with the way the group tends to take the most honest and generous characters -- T-Dawg and especially Glenn -- for granted, and pleased to see other characters and the narrative finally start pointing out that injustice. The story emphasis on the festering secret of Lori and Shane's adultery, and the mounting evidence that adultery is the least of what Shane is capable of, quickly wore thin for me, but led to what I consider a key moment: when Lori interrupts Shane's latest hackneyed self-serving speech about "making the hard choices" to tell it like it is: "There's nothing hard about cutting our losses and running."

"Life is pain, Highness," Westley says to Buttercup in The Princess Bride, "and anyone who tries to tell you differently is selling something."  He's not wrong, but he's not right either, and even at that moment he knows better himself. It's all a test. (For which I spend a good half of both novel and movie wanting to smack him, but let's avoid that tangent for the moment.)

Back when I first fell in love with Being Human (the UK original, though there's a lot I like about the SyFy version as well), I summed up its core thusly: "Life is frequently and drastically unfair, but we find ways to make it worthwhile anyway." As that show has evolved into something larger and darker, it's sometimes struggled to hold onto that core and the close bonds of the constructed family at its heart, but the message remains.

Circling this back around to my current theatrical endeavor, it's all too easy to dismiss the seemingly small dramas of the March family as quaint, fluffy, irrelevant to our 21st-century experience. And it's a mistake.

Little Women runs four performances only, December 10-18, 2011, at the Cosman Cultural Center in Huntley, Illinois. Visit the GreenRoom Productions website for details.
Posted by Unknown at 11:32 AM

>"He's not wrong, but he's not right either"

Yes, that! I enjoyed reading this reflection, and I agree on all counts (except that I have not seen The Walking Dead, and so can't speak on it). Thank you for sharing.

[Addendum: LJ isn't cooperating with OpenID. This is Studiesinlight speaking...]