In which our Diva has been missing the obvious 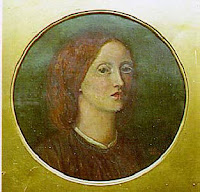 If you've been around this blog a while, you might remember me mentioning that the whole Lizzie Siddal thing started for me with her self-portrait. It's been a solid twenty years now, but I still vividly recall flipping through Jan Marsh's Pre-Raphaelite Women in the bookstore at Okemos Mall (a relatively convenient bus ride from my Michigan State dorm) and stopping short at this image with a near-physical shock of something very like recognition.

Over the years, I've pondered where that reaction came from. It's not that I actually think she looked that much like me (though it's also not hard to figure out how a pale, skinny, redheaded dreamer promptly developed an enduring fascination for her). It's the expression that reached out and grabbed me, eloquent of concentration and minute examination.

Lizzie painted herself... painting herself. Studying, perhaps even criticizing. Descriptions of the portrait -- just nine inches in diameter, and Lizzie's first and most successful known work in oil -- usually contrast its directness with the downcast gazes and romantic glamor of Rossetti's many portraits of her. It's part of the reason my work-in-progress finally acquired the title Unvarnished.

The easy conclusion to draw is that Rossetti (and, perhaps to a lesser extent, the other artists she sat for) projected a particular image onto her, and there's a lot to be said for that conclusion (hey, look, it's another Beatrice, and another, and Gabriel, honey, this is becoming an issue), but it doesn't necessarily follow that she painted The Truth in counterpoint to his romantic embellishment.

In fact, as occurred to me in a headsmacking moment the other day, it wasn't physically possible for her to do so. Which I knew, of course, but I hadn't quite thought through the implications this way before. 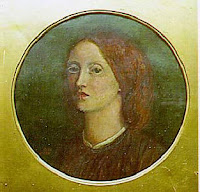 Like any self-portrait prior to the ascendance of photography (and, I expect, a good many even today), it's not a portrait of Lizzie as anyone else saw her. It's a portrait of her reflection. Which is not the same thing at all. But it's the reflection that spoke to me on that glossy page all those years ago. Sure, I could stare at Ophelia or Beata Beatrix all day, but that modest little circle still pins me like nothing else. I wonder if she ever held the portrait up to a mirror (as simulated here through the magic of Photoshop)? Did it shed any light on the connection between her "unvarnished" self and what others saw?

This train of thought brings to mind this blog post I read a year and a half ago, in which Cleolinda (who writes the sidesplittingly funny "Movies in Fifteen Minutes" recaps as well as the best good-natured skewering of Twilight you will ever encounter) states, quite clearly and cogently, what should be obvious but isn't necessarily, about what we see in the mirror vs. what everyone else sees.

And that's just in the purely physical sense, before you get into the mindgames we play with ourselves. And oh, do we play them. My own relationship with the mirror remains largely that of a dancer -- it's a tool for finding faults, but also for fixing them, and most of all for practicing and adjusting what I show to the world. I get along much better with my reflection than with most photos of me (which is probably why Cleo's post stuck with me), but still... Well, there's a reason that searching, critical look in Lizzie's eyes is so very, very familiar.

It's funny that, as Kirsty Stonell Walker pointed out in a post a few months back over at The Kissed Mouth, there's a metric truckload of Victorian art assuming women's relationship with the mirror to be all about vanity. But I'm inclined to think that then, as now, it was a whole lot more complicated than "Oh, look at how pretty I am!"  I can't help but imagine that within each painting where the viewer sees a glamorous nymph admiring herself, the nymph herself sees something a bit more stark looking back at her.

Jane Eyre painted Blanche Ingram as imagined perfection, on ivory with her finest pigments, before ever meeting her in person -- and depicted herself on plain paper with every flaw laid bare. All those dudes painting the girls in love with their mirrors should have checked with Miss Bronte or Miss Siddal for the real score.

(And on that note, back to my reflection of Lizzie, coming soon to a stage near you. Just as soon as it has a whole script. I'm getting there. This thought process is distilling its way in as we speak...)
Posted by Unknown at 10:22 PM

Oh wow. This is an amazing post Valerie. I've always loved how different Lizzie's self portrait is in contrast to DGR's portrayals of her. It's captivating. I like your perspective on it.

I wonder how realistic a self portrait would be. Would we focus too much on our flaws? Would others think they were looking at another person? Even when an artist paints a model, are they painting the sitter as a character in a narrative or as themselves? I can see where an artist can use his imagination and end up with something that really has very little in common with the actual model. Even photos r be tricky. I know that early photos were done quite differently and required the sitter to not move for a long time so you get a stiff and unnatural pose. And now we have photoshop to really change the original photograph. It really is hard to know what Lizzie actually looked like from the information we have.

When I draw models I'm attempting to capture an essence of him/her, the natural way they hold themselves, as others would recognise them.
With a self-portrait we're observing ourselves staring back in stark concentration as we try to interpret our own image, which is always going to be very different from the way we would gaze into the eyes of another artist attempting our portrait.

Stephanie: Thank you! The funny thing is, looking back at my comment on Cleo's post, I had completely forgotten that I commented there using my "Unvarnished" Lizzie self-portrait icon (which is, incidentally, how I met Jenna Waterford!) and noted that it was appropriate because she would have painted it from a mirror. But the thought process went *poof* until sparked again by another conversation last week. Why notes are important! :-D

Lisa: You're definitely onto something there. 150 years from now, will it be equally difficult to tell what any of us actually looked like? I've lost count of the times people have commented that, even though they recognize me from photos, they're surprised by how different I look in real life. (Whether they've seen a professional photo or some gorpy snapshot doesn't seem to matter!) And how often do people say that such-and-such celebrity is even more attractive in person? When some artists pushed back against photography, I wonder if they didn't have a point -- maybe they get closer to the truth, at least in some respects!

Becky: Thank you for the artists' perspective! I suspected that was the case about self-portraits. They almost always seem to have that particular intensity about them. I'm still not entirely sure why Lizzie's in particular clicked so much with me, but I'm certainly not sorry it did. I love the insight about drawing people "as others would recognise them."

Hope you don't mind me posting my new website here. Lizzie was my gt.gt.gt.gt. aunt, but I know no more about her than anyone else.
www.rebellart.co.uk

Not at all, and thank you for the link! I love that you're providing regular affordable sketching sessions like that.