And this is only earth, my dear

In which our Diva pauses to remember
One hundred fifty years ago today, Elizabeth Eleanor Siddal Rossetti died of a laudanum overdose at the age of 32.

I had grand ambitions to finish writing Unvarnished, the one-woman show about her I first conceived nearly a decade ago, in time to be well on the way to production on this date, if not actually up and running. And, well, that hasn't happened for a variety of reasons, chief among them being that I'm both a busy actor and an unreliable writer. :-)

If finances and other obligations were kinder, I'd be in London right now, sharing the day with other admirers drawn by the memorial events scheduled at Highgate Cemetery with the participation of Jan Marsh and Lucinda Hawksley, two of the primary authors whose work has kept Lizzie's work and story alive in the public consciousness. I had the good fortune to meet the down-to-earth and gracious Lucinda for coffee on a whirlwind day in London last February. (So whirlwind, in fact, that I was appallingly late for our agreed-upon time, but she was very kind about it despite her own busy schedule).

Earlier that day, with just an hour or so to visit the Tate Britain, I made the decision to spend essentially all of that time in the "Key Works From the Historic Collection" room, whose far end is home to a concentration of the Pre-Raphaelite favorites that have accumulated on my bookshelf for two decades. After giving each painting a few minutes' close examination, and chatting for a few minutes with the lovely middle-aged lady who was kind enough to take a snapshot of me with Ophelia, I took a seat on a nearby bench and scribbled a dozen-plus journal pages of observations, not so much on the paintings themselves, but on the way people approached and interacted with them. And, of course, specifically with Ophelia, so famous, and such a magnet for adolescent girls in particular. I heard a pair of friends, perhaps twelve or thirteen, chattering their way down the long room behind me, grow hushed and suddenly serious as they approached.

It's a modestly-sized work, placed a bit to the side in the composition of a wall dominated by Burne-Jones' King Cophetua and the Beggar-Maid, which I had somehow never processed was quite that enormous. But nobody misses it.

I sat there for about half an hour, and at one point my journal scribbling became a poem, something I've dabbled in but never been at all serious about. I don't know whether I'll end up using it somehow in Unvarnished. I don't really see how, as it doesn't mesh in style with Lizzie's own poetry, or that of her contemporaries, that I'm weaving into my text. So maybe here is where it belongs...

They walk past me, speaking in
reverent tones, as if in church
Or in a graveyard

This is more my monument than that
stone at Highgate, where I lie
Among those who share my name
by marriage
But who never quite wished
to share that name
with me.

Here, behind the glass, my colours
are undimmed

A pretty lie to assuage his
guilt, his turmoil
at recovering that
which he should never have
given me at all
I had no need of them

Here it is the truth.

What you seek is this
The girl in the water
She's easy to find
She hangs on the line
Wouldn't Mr Millais have
been pleased by that? 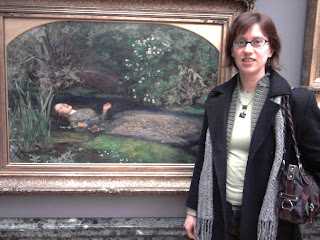 Yes, he would have been pleased.

Thank you both so much!