The lights of Laramie

This is probably the latest I've ever blogged about an upcoming show, but that's partly because we have a bit of a compressed rehearsal process before our April 4 opening..

With a play like The Laramie Project, that's a lot of emotion packed into about six weeks. In the fall of 1998, when Matthew Shepard's horrific murder captured the world's attention, I caught the news coverage in between rehearsals for the production of Macbeth I was directing in Columbus, Ohio. In New York, playwright Moisés Kaufman and company members of his Tectonic Theater Project prepared to travel to Laramie and, ultimately, create a very different narrative from the one constructed by the 24-hour news cycle.

The play is assembled from over 200 interviews with the people of the town, as well as public-record texts and journal entries by company members. That last category of insight, as woven into the show's opening moments, reveals the chroniclers' own prejudices and apprehensions about what kind of people live under the wide high-plains sky. About what kind of welcome they might find.

I can't help chuckling a bit at those passages, but I can't blame them either. They were city-bred strangers, some of them gay, venturing into the relatively small town where a young gay man had just been beaten to death. More than that, they had been inundated with the same media narrative as the rest of the country, the one that turned the romantic literature and folklore of the American West inside-out and hung it up as ironic backdrop to darker truths.

It's a narrative I know all too well, and one that sets my teeth on edge every time it finds its way back onto my TV. Every time the worse angels of human nature manifest themselves somewhere in the vast portion of this continent so often dismissed as "flyover," the old romantic notions are trotted out and tied to the pillory for the mocking, as if no one has ever challenged them before.

Those people over there, far away from us in our enlightened sophistication. There is the stagnant pool where society's diseases fester, the ignorance and hate that infect our world. Those rednecks, hicks, zealots, bigots, so foolish as to be surprised when these terrible things happen there.

As I watched the news from Laramie unfold, my shock and grief at what had been done to Matthew Shepard sat alongside distaste and growing resentment for the way the story was being told.

Yes, I said "resentment," and I chose that very personal word deliberately. From sixth grade until I moved out of my parents' home, I lived in Bennett, Colorado, some two hours south and east of Laramie, with less than a tenth its population. Wikipedia will tell you it was home to "Colorado Spam King" Edward Davison and to the late Tim Samaras of Discovery Channel's Storm Chasers.

It will also tell you, in a single dry paragraph, about Bennett's fifteen minutes of national attention a few years ago, when the elementary school music teacher faced firing for showing her first graders a 30-year-old episode of the PBS series Who's Afraid of Opera? It won't tell you about the most ignorant possible quotes plastered all over the news reports, from people (not all of them even parents) hand-wringing over  the subject matter of Faust as if the kids had seen the entire opera instead of a sanitized excerpt.

It won't tell you how sad I was to read those news reports and be reminded forcefully of a similar kerfuffle the summer before my junior year of high school, when plans to implement a "global education" curriculum were scuttled by the outrage of parents, largely stoked by John Birch Society activists from out of town who turned a public forum about the issue into a circus. Not enough of one to catch national attention, but a Denver news team did drive out to grab a few sound bites. School hadn't started yet, so I think they were just looking for B-roll of the building when the cheerleaders came out of practice and gave them some (as I recall, from my 16-year-old perspective) pretty succinct and cogent comments about the misinformation going around.

When the segment aired that evening, though, the one and only resident who appeared was a woman saying "Well, I think it has a Communistic or a Satanistic background," and the tone of the entire piece was "Look at this backward, benighted town." So when "Operagate" came around years later, and all my arts friends were looking at the coverage and shaking their heads, I didn't much relish the awkwardness of simultaneously standing up for my former hometown and being sad that such reactionary elements can still disrupt everyone's lives there. 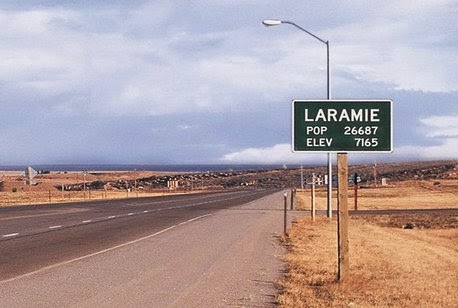 Bennett is lucky: It's had its embarrassing media moments, but not because anyone died. The humiliation of Laramie on the world media scene, the painting of an entire community as backward and destructive and rotten, the implication that everyone was as culpable as the actual murderers, shook me on a level I still can't adequately express.

But the "let's all shake our heads at the benighted hicks" narrative places their world somewhere outside our own. It encourages us to believe we're different, to sit back in our self-righteous blue-state complacency and ignore the tar pit of unexamined assumptions and privilege bubbling under the foundations of our own homes.

Kaufman and his colleagues did a brave thing in turning away from that narrative and seeking the truth. The people of Laramie did a brave thing in agreeing to share their truth, with all its awkward pointy angles, with yet another set of strangers with tape recorders. Between them, they created something that isn't easy or tidy, that sometimes presents more questions than it does answers. They created a way to tell the story as it was, and as it continues to be.

In The Laramie Project, Father Roger Schmit, the priest who hosted the first vigil for Matthew Shepard as he lay in intensive care, urges the company members interviewing him to "deal with what is true... You need to do your best to say it correct."

I'm humbled and honored to be part of telling that story.

The Laramie Project runs April 4-13, 2014, at GreenMan Theatre in Elmhurst. Details and ticket information can be found at their website.
Posted by Unknown at 10:52 AM

Labels: onstage in the burbs, shameless plug, tell me a story, the laramie project