The quality of mercy

In which our Diva has been doing some listening and pondering

Being acquainted with a number of industry people on the other side of "The Pond," as well as a fan of various British TV fare, I've had quite a few conversations in the last few years that touch on the differences in acting education and career shapes between the US and UK. The broadest is that over here, we're much more likely to be specialists, whereas traditional British drama-school training assumes that you'll be doing a bit of everything -- theatre, film, TV, and what is arguably the most specialized in this country, audio.


British friends are often surprised when I explain that straight-up, studio-produced radio drama has been absent from American airwaves for decades, with a few NPR offerings recorded in front of live audiences as the closest thing that remains. Happily, there's been a resurgence of the form in the explosion of podcasting. Nobody could have predicted the runaway popularity of Welcome to Night Vale (which, after listening to it for nearly a year, I still think is most conveniently described as "News From Lake Wobegon with Cthulhu mythos," though that doesn't quite cover it), and the likes of Pendant Productions and Decoder Ring Theatre are making a pretty respectable showing too.

Meanwhile, though, Auntie Beeb never stopped putting original drama on the radio, and these days you can stream or download a lot of it online. (Unlike most of their video, BBC iPlayer radio programming can be played outside the UK.) Some programs are also delivered by podcast; I've been subscribed to the one for the Drama of the Week for a while now. 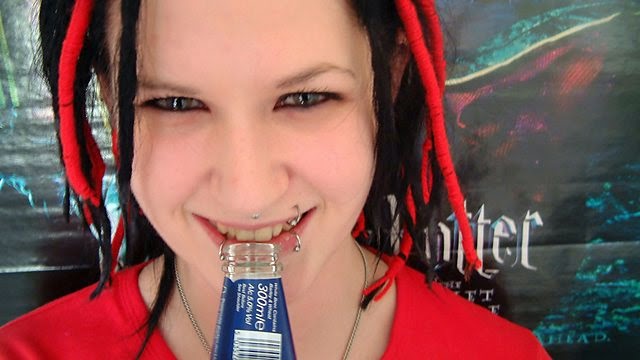 Which is how I came to find Porcelain: The Trial for the Killing of Sophie Lancaster (sadly not currently available) in my digital media library in March. It sat there for weeks on end, un-listened-to, for precisely the reason it turned out to be even more interesting to me than it otherwise would have been: I was in the middle of rehearsals for The Laramie Project, and wasn't quite up to another dramatization of a hate crime against a young person by other young people.


I recalled the brutal beating and stomping of Sophie Lancaster and her boyfriend Robert Maltby, though it received relatively little coverage from US news outlets, precisely because there was some controversy over whether it should be considered a hate crime, whether the victims being singled out for their gothy appearance really belonged in the same category as racist or homophobic or religiously-intolerant violence. I see the point, but I also know that the freedom to express themselves in the aesthetic language of alternative lifestyles, and to associate with others who share their interests, has been a literal lifesaver for more than one person in my social circle. So the argument that they could just choose to dress like everyone else isn't going to get much more traction with me than the "just don't be gay where people can see you" mentality.

Re-encountering the case in this form, as well as in this TV documentary about the case, I was struck by the numerous parallels with Matthew Shepard's murder in general and echoes of TLP in particular.

The shock of community members that this happened in their small town "where everybody knows everybody," committed by its own troubled children. The repeated mentions of Sophie's small physical size and peaceful nature. And, like Matthew, Sophie lingered in a coma for days, though her family was forced to make the devastating choice to take her off life support.

There are differences too, of course -- Sophie and Rob were attacked in a public park, in front of multiple witnesses who were on the phone to emergency dispatchers even as the crime was taking place. No ideological cousins of Fred Phelps showed up to harass the grieving community with "God Hates Goths" placards.

But in the aftermath, Sylvia Lancaster seems to have asked herself and her world many of the same questions as Judy and Dennis Shepard, and to have arrived at a lot of the same answers, including starting a foundation in her daughter's name to combat hate.

And when the radio play got to the victim impact statement Sylvia wrote -- which she never got to read in court -- the kinship of her words to Dennis Shepard's spoken nine years before and thousands of miles away was unmistakeable. Especially the key words that kicked me in the gut at every performance of TLP: "I will never forgive."

And yet, at several points in the radio play, she expresses the need for mercy toward her daughter's killers, and sorrow that their mindless actions have destroyed their own young lives as well as ending Sophie's.

It brought me back around to something that was on my mind throughout the TLP rehearsal and performance process, and which I often encounter in people's interaction with fictional stories as well as real ones: Forgiveness and mercy are not the same thing, and "deserving" is irrelevant to both. Some glimmer of redeemability in the recipient might be part of what prompts us to give one or both gifts, but ultimately, when we grant them, it's because we need to.

Some parents choose to forgive the killers of their children, and find a peace in that. Some parents, like Dennis Shepard and Sylvia Lancaster, cannot. It's a very difficult, personal choice that I know nothing about, and I'm the last person to say that either is wrong.

What they can and have done, however, is show mercy. You don't have to read very far to encounter the idea that the Shepards chose to ask the court not to pursue the death penalty for Aaron McKinney because it prevented them from being put through the whole ordeal all over again in his appeal, and no doubt there's truth in that. But what Dennis said in addressing the court rings no less true: It was time to start the healing process. For themselves, and beyond that -- even if McKinney himself might prove incapable of it -- for his family and friends.

Somewhere today, Aaron McKinney's son is sixteen or seventeen -- the same age as the boys who attacked Sophie Lancaster and Robert Maltby. Somewhere he is learning what it means to be a man in a world that taught his father all the wrong lessons about it. Meanwhile, Judy Shepard and Sylvia Lancaster and the organizations they've founded work to save the next victims -- but also the next killers.

Over and over again, our culture talks about whether someone "deserves" mercy, running counter to the very definition of the word.

If we deserved mercy, we wouldn't need it.

Please visit and support the Matthew Shepard Foundation and the Sophie Lancaster Foundation.
Posted by Unknown at 8:33 PM

Labels: audio drama, tell me a story, the laramie project