Mermaid-like awhile they bore her up

It's been over a month since I scrawled the words "END OF PLAY" in a spiral notebook, and just over a week since I typed the same ones into Celtx. Over a decade since the idea first hatched in my little brain, Unvarnished: A Portrait of Elizabeth Siddal is finally becoming an actual coming-to-a-stage-near-you solo theatre piece.

It even has a Facebook page, for which the wonderful Pre-Raphaelite social mediasphere has already garnered 161 Likes. I'm in contact with a venue for the first public reading, which will likely be in November or December in Elgin, and mulling various logistical considerations for touring the fully realized production.

With all that going on, of course I picked today to have a eureka moment about Ophelia's dress.

That's not entirely out of left field. In my text, the dress is the springboard for a little flight of fancy while Lizzie poses in the infamous tub, and it's always been important to my mental image of the show. But the details craved by my obsessive little costumer's brain (which couldn't help being a bit disappointed by the sad greyish thing the mostly gobsmackingly gorgeous Desperate Romantics put on Amy Manson; the designer for Emma West's Ophelia short film seems to have given it a little more thought, albeit on a restricted budget), are tantalizingly thin on the ground. Millais himself recorded in a letter that "To-day I have purchased a really splendid lady's ancient dress - all flowered over in silver embroidery - and I am going to paint it for 'Ophelia'. You may imagine it is something rather good when I tell you it cost me, old and dirty as it is, four pounds." (The Tate Britain educational info on the painting estimates that this would be about £250 today.)

Now, it didn't take too long to decide that a 20-something guy's idea of an "ancient dress" -- even if that 20-something guy is a genius painter intent on getting his masterpiece absolutely right -- is likely to be defined fairly broadly. In all likelihood, we're talking about something kept in a trunk for a generation or two before it found its way to the secondhand shop where Millais found it.

Which somewhat remarkably gives us more to go on than the painting itself, in which the distortion of the water makes it nigh impossible to discern much about the actual shape of the garment. That said, the shape does appear to be relatively simple, which lends further weight to the likelihood that it dated to the first couple decades of the 19th century. 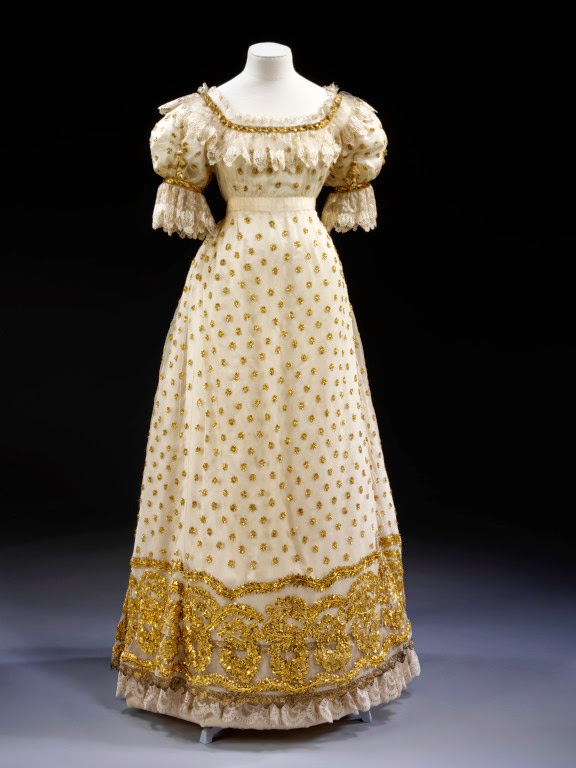 The advent of machine-made net at the close of the 18th century paved the way for the early-19th-century fashion for gowns of muslin overlaid with embroidered net, often in gold or silver thread. So I've been working for a long time under the assumption that the Ophelia dress fell into that category, as typified by this gorgeous specimen at the V&A.

The place I've always been tripped up is the neckline, which is clearly a couple inches higher than is typically found on this type of dress, appearing to cover Lizzie's collarbones. It's one of the few structural details we actually can see in the painting...

That eureka moment I mentioned? Follow the red dotted line: 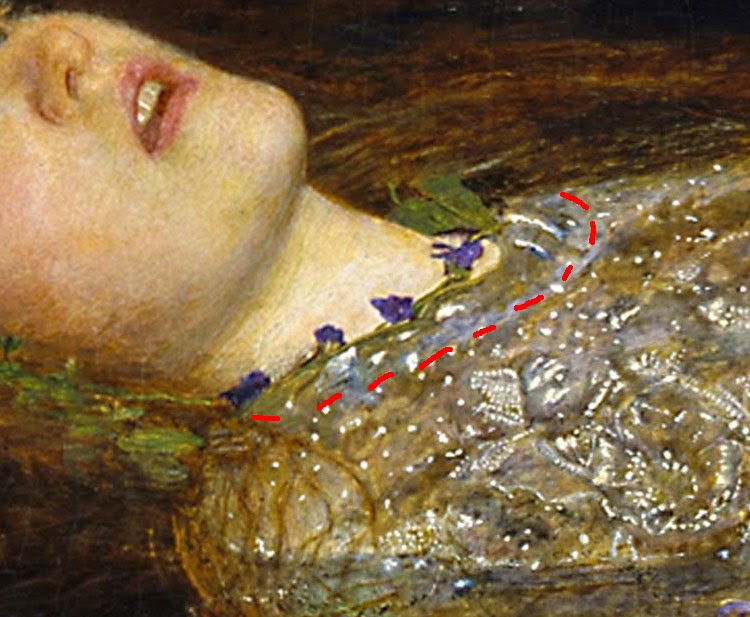 Yup. Right there in front of me the whole time: the actual neckline of the dress, outlined in reflective bluish highlights.

At first I thought maybe he painted the actual neckline, then altered it to look more medieval and/or better represent Ophelia's virginal innocence for his contemporary audience. But the more I look at it, the more I wonder what that lace flounce around the top of the V&A dress would look like if it were flipped up and clinging to its sopping wet wearer. I suspect it'd look a lot like this.

So, that's that direction settled on. Too bad I hemmed and hawed just a little too long about that perfect vintage sari on eBay; I probably could even have used the choli for the bodice! Ah, well. I'll just have to look around some more. Darn. Shopping. ;-)