Work what you got

I now have in my hot little pixel-stained hands the two headshots I picked from my shoot with Beth Cummings at the end of January. (I would have had them a lot sooner, but her original email fell into the ether and I just now got around to asking after them.) Beth is one of the kickass women of Babes With Blades, with whom I had the long-aspired-to privilege of performing in last fall's Horror Academy. She just recently launched her business, and I totally recommend her to anyone looking to update. She does some really innovative things with angles, while still fitting into the stylistic expectations of the Chicago market.

In a fairly typical scenario when I'm the subject, out of about 200 shots, I managed to find one... 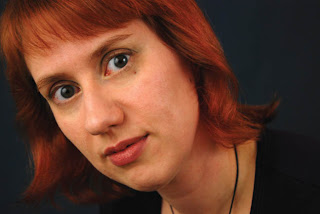 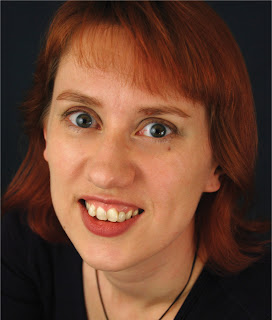 ...I picked because I'm entitled to two, and it has something that drew me, but also things that bug me.

The biggest thing that bugs me I can do something about, and need to just get around to it: I swear my teeth get crookeder by the day. I have the oral surgeon and orthodontist referrals. I will call on Monday. *determined face* (Short version: Never bothered getting wisdom teeth out. Not enough actual room in mouth. Traffic jam.)

The smaller thing is that "deer in headlights" thing that I've always had. Just ask my mother -- I don't remember when she didn't point out that the distinctive feature of even my baby pictures is that "you can see the whites all the way around your eyes!" Which is cute and funny when talking about baby pictures, but not terribly useful as a first impression for a serious adult actress, y'know? But I always have to really concentrate to keep it from happening pretty much any time I'm trying to hold still.

I'm working on tipping that love/hate relationship with photos a little more to the "love" side. It's a challenge. This is my calling card, my knock at the door, my little 8x10 package of "This is me, and you want to see more." The challenge for me in judging and picking them has always been to try to approximate a first-impression eye, instead of being drawn immediately to the familiar flaws. (Yes, flaws give you character. However, there's only so much character they want, especially from a woman who reads as under 30.) I've always considered myself reasonably attractive (barring the occasional hormone-driven bout of "OMG give me a paper sack STAT!" that everyone has), but that's in the real world. There's only so much water it holds in an undustry with truly surreal quantities of pretty wandering around.

My criteria are simple: I want it to (a) look like me, and (b) look good. That's a lot harder than people who know me in real life tend to expect. Poor Beth got me on a cranky evening after a cranky day at Office of Doom, when the luck of the draw just meant I was having a helluva time letting go of the tension of the day. So the fact that she managed to take any pictures I like is a minor miracle.

I'm not a model; I have no expectation that posing for still photos is ever going to be a large part of my work. But it is always going to be a part, and it is usually going to be what people see first. For better or for worse, things are structured such that I'm being assessed out of the gate on something that is a weak point for me. So sometime in the next year or so, however long it takes to get my teeth closer to where I want them, I need to learn how to be better at it.
Posted by Unknown at 12:06 PM