Those of you following me on Twitter may have noticed some cryptic comments the last couple days about "Lizzie," and wondered what the heck I was on about. Or possibly you didn't care, which is also perfectly fine. (The cryptic thing is one of the reasons I've finally caved and climbed aboard yet another electronic bandwagon -- 140-character-or-less nibbles of people's lives are astonishingly addictive, and I'm finding the more opaque ones to be the most compelling. But I'm weird like that.) 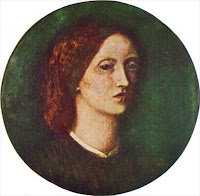 In any case, it all started with this self-portrait of Elizabeth Siddal, when I first saw it about 20 years ago (eeep!) in the now out-of-print Pre-Raphaelite Women by Jan Marsh. I vividly remember flipping through it in the bookstore and stopping dead to stare at this image for what seemed like minutes. I instantly wanted to know who this woman was, and how she could possibly be the same person painted by William Holman Hunt, or Dante Gabriel Rossetti, or most famously by John Everett Millais. I've read everything I could get my hands on about her ever since, and a few years ago hatched the crazy idea of developing a one-woman show about her.
There are certain images crystal-clear in my head, threads the notion hangs by when I hit a writing wall and think I can't do this... but I want to put these images on stage! With all the crazy-busy of the last year or so, with my career suddenly growing in different directions, I haven't even been doing the little dribs and drabs of work on it that I had been. Now something's gone *sproing* and I'm getting back to it. Not much concrete yet, maybe, but a shift in my way of thinking that makes me realize some of the things that have been stopping me are really irrelevant to this project.
See, I want to get her "right." And I didn't realize how much I hadn't let go of the notion that it needs to be factually accurate. I'll let the scholars duke that one out, as they have for over a century. This is a work of theatre, and it needs to be the Lizzie that's right for how her work and her words and others' images of her and words about her come together and come down to me.
It doesn't matter whether her death by laudanum overdose was accident or suicide. It matters whether she wanted to die. (Do I know the answer to that? Not yet, but now I think I'm asking the right question.)
It doesn't matter what the actual clinical diagnosis of her chronic ailments might have been. It matters that she was an intensely creative person who persistently lacked the strength to create. (I can barely imagine the frustration of that, but have several dear friends who live it every day.)
I don't have this trouble when it's just about acting. I'll research a historical figure in as much depth as I possibly can, mostly because it's an excuse to research. (Seriously, my ideal day job is dramaturgy. Too bad there's even less call for that on a full-time basis than for acting!) I've posted here before about that process when I played Lucy Hale. And I read more about Catherine de Valois than anyone would think I possibly needed to know just to play Princess Katherine, with her broken English and her whole adult life ahead of her. But surely even that girl, listening bewilderedly to Harry's clumsy so-called wooing, must have something in her of the woman who would outlive him and remarry to become the mother of the tempestuous Tudor dynasty!
But I've always started with Doug Hoehn's Lucy, Shakespeare's Katherine, William Gibson's Anne Hathaway. They gave me the words, and I made them my own. This time, the words are mine.
I knew that was harder than it looked, but damn.
Here's to keeping momentum going this time! Let's see where it takes me...
Posted by Unknown at 12:08 PM

I WAS curious what the hell you were talking about.

When you feel you're at a point to share for feedback, let me know!

Definitely will! It'll probably be a long wait... *wry g*