In which our Diva is resigned to a certain reality, but it still gets under her skin once in a while
In a conversation I had yesterday, I mentioned that the reason I was making up Office of Doom hours after 11 Sunday night was that I spent Saturday at Chicago Comic-Con and Sunday filming a short.
The response? "Oh, but that's fun stuff."
Um. 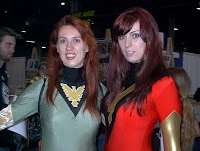 Walking around in a superhero costume, posing for pictures and meeting people whose work I like (including childhood heroines Nichelle Nichols and Margot Kidder)? Absolutely "fun stuff," albeit exhausting.
Filmmaking? It has its fun too. It also has spending a very long, very hot day outdoors. In makeup. Waiting, waiting, waiting, being ON!, waiting some more, being ON! Changing into a long-sleeved heavy satin wedding gown in my car (did I mention very hot day?).
I love acting. Love it beyond all reason. You have to in order to do it. Because you don't get to do just the fun parts. Gina Holden estimated in an interview I read recently that 2% of your working time as an actor is actually being in front of the camera acting. It sounds like an exaggeration. It's not. You spend the rest of your time waiting, studying, researching, marketing, handling business. All so you can get that little fraction of time -- the time that is seen by everyone else -- to inhabit the skin of the character whose story you're telling.
Because it's all they see, most people think it's all there is. Which is how they can say things like the comment above.
Like "Well, I want to stay home and read, but nobody's going to pay me for that."
Like "So you have a real job too?"
I commented not long ago, on a blog post by (sometimes curmudgeonly, always brilliant) TV writer Denis McGrath, that the problem for artists is that most people just can't wrap their heads around something they consume at their leisure not being produced at ours.
And the truth is, they're mostly never going to. I have yet to see a single solitary person on a film set for the first time, no matter how well-informed, not be abjectly shocked by the sheer amount of time and work, by the sheer number of people, it takes to produce just a few minutes of what will be seen on screen. It's nearly impossible to explain, unless you understand how the process works, that it's not because of disorganization or laziness or inefficiency or whatever. It's because that is the only way it can be made. You can't just have an idea and point a camera at it, and hey-presto, you have a film. Imagination is only the starting point.
I joke that my life's work is playing make-believe. At its purest, this-is-what-we're-here-for heart, that's true. That's how stories get told.
That, and a whole lot of people doing a whole lot of work.
Posted by Unknown at 12:34 PM

Nice post! For one thing, yes, it's hard to explain how much work goes into any production (and I know I don't know the half of it), but you do a great job of it.

For another, I'd been hoping to get a look at the Phoenix and Dark Phoenix duo pictures. The idea of those two together in one place? SCARY.

I was about to say it's a good thing that couldn't happen, but with all the twisting and retconning they've done (whether Phoenix is or isn't Jean, what connection real!Jean has to the Phoenix Force, etc.), it's not inconceivable.

Of course, it would also likely be the end of the universe as we know it. Pretty much literally. So there's that.