In which our Diva does her best to stay connected

One more shooting day on Connections. Mixed feelings, as always when any project ends. Sad to see it go, excited for the next thing. Pretty much everything I've done this year has been whirlwind, with little time to get to know my colleagues, and this one has been a little longer and settled in a little more. I've gained some valuable friendships even on the small ones, though, and am that much more appreciative of the tools available to us online to keep in contact.

I understand where people are coming from when they worry that communication online is too superficial, too impersonal. And it's true that it's no substitute for real human contact. But it's a heckuva a valuable supplement to it, particularly for actors or anyone else who works on a project basis. My best intentions notwithstanding, cast contact lists of phone numbers and email addresses sit in folders in my hard drive gathering virtual dust. Meanwhile, five minutes on Twitter or Facebook will give me a snapshot of what's going on with people I might not have seen in person in years.

It also plays into something I've frequently tried to explain to friends, that growing up on Air Force bases with a constantly shifting collection of faces in the classroom and in the neighborhood makes it seem perfectly natural to me to operate that way as an adult. I don't go in much for big goodbyes, or fretting about making sure ties of friendship are tended to -- arguably to a fault. In my head, it makes perfect sense to run into someone after a week or a month or a year or a decade, and essentially pick up wherever we left off.

In between, I do miss them, in the sense of "Oh, so-and-so would have loved to see this." (And how much do I love being able to see something online and share it with so-and-so with a few clicks?) But I've gradually come to understand that it's not the same thing most people mean when they say they miss someone. The intensity, the acuity, of that is something that I still work hard to grasp. It's certainly an important thing to understand about human nature, which is of course what I'm all about as an actor. 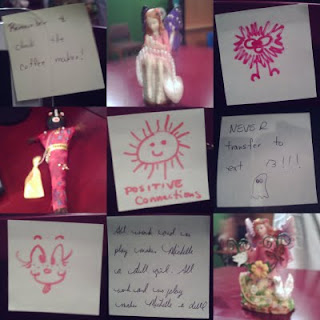 This Wednesday, I'll say goodbye to my first TV series (a final count of three episodes is still a series!) experience, with all its ups and downs and the challenges of a very small-time environment. Goodbye to Michelle's desk, with all the little details it acquired. But the people involved are still there on my Facebook friends list, to see where they go from here and where we might connect up again.

First, though, I have the first read-through for Pride and Prejudice today. A completely different show, a completely different environment, with some of the same people I got to know during last fall's Dracula. I can't wait to find out which ones (I don't know all the casting info yet), to pick up with them where we left off, and take part in the alchemy of creating something new with them and with others I don't yet know.
Posted by Unknown at 9:16 AM

Labels: crunchy process goodness, onstage in the burbs, television is not furniture, time to smell the roses

Some of us understand. You're always, as one of your LJ icons says, an object in motion, and it's only natural that your human contacts have to come in fits and starts. It's remarkable that you maintain contact with as many people as you do. I hope you continue to accumulate friends as you go forward.