In which our Diva plays catchup and flouts the Edna Mode "no capes!" rule

This blog was supposed to happen a couple weeks ago, but it didn't quite get squeezed in around Pride and Prejudice rehearsals (which I'm loving and will post about soon) and Hawaii (which was absofrickenlutely AMAZING and will be posted about soon).

I love serious acting. I love Shakespeare and edgy new works and digging in deep to tell meaningful stories. 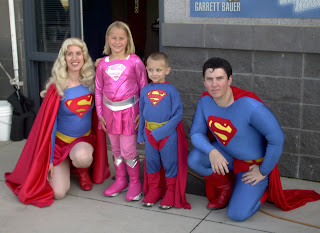 Know what else I love? Walking around a stadium in a cape and flippy skirt with an S on my chest, interacting with kids and signing autographs as Supergirl. I'm a soprano of a certain physical type with a dance background, so it's inevitable that I've done my fairytale princess time in children's theatre, and the best part was always meeting the young audience afterwards. Being Cinderella in their eyes was priceless.

But being Kara Zor-El? A hundred times dearer to my geeky little heart.

I'm both a superhero girl and a princess girl. Always have been, always will be, and I'll never understand why people think they're somehow mutually exclusive. Only grownups, though. Little girls get it. Just ask my young friend in the pink over there. (If that makes you blink, you haven't seen the pink Batgirl costume made by the same company!)

If you looked at my actual comics collection, you wouldn't necessarily peg me as a Supergirl fan, but she's the natural first choice for a family event appearance. She's who I would have looked for when I was the little girl who went to her grandparents' house and read through piles of her her uncles' and aunt's comics for hours at a time. (Yes, Virginia, girls read superhero comics and always have. No matter how often people seem to think it's news.)

Maybe it's because she's a little bit of a princess girl herself. Not in the needing-to-be-rescued way, but then that's never what I cared about in fairytales either. Certainly her story could be a fairytale in the blink of an eye: Once upon a time there was a young girl who lost her home and family forever, and traveled alone to a strange new world...

And that last part is important, the main reason she's not just a female copy of Superman. He grew up entirely on Earth, and for all that he honors his heritage, he'll always be more Clark Kent than Kal-El. Kara arrived here as a fifteen-year-old girl who saw everything she knew destroyed. She started from scratch at an age that's hard enough for kids who've lived here all their lives, while simultaneously learning to deal with extraordinary power and the responsibility that comes with it.

Over at Marvel, you get Spider-Man's Uncle Ben telling him "With great power comes great responsibility." The DC equivalent (well, sort of, since it applies to a narrower set of characters) is the concept of what it means to "wear the S." The family crest of the House of El, now symbol of the fusion of Kryptonian power and Ma and Pa Kent's homespun values. The badge of the Big Blue Boy Scout (an actual nickname pinned to Superman by more cynical Justice League colleagues).

And of his cousin, whom an essay I read recently described as "the original indestructible cheerleader." (Now that they mention it, there is a whiff or two of Kara about Claire Bennet, isn't there?)

I'm rambling. A lot. Maybe I should just cheat and direct you to this excellent blog post about Supergirl-as-icon, and why she's really irreplaceable for little girls in particular. Go ahead. I'll be right here when you get back. 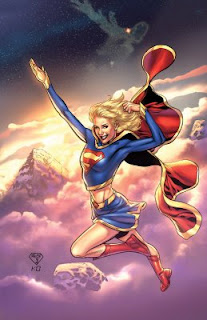 Done? Cool. I have even better news: That blog post is a couple years old, and the problem she's talking about toward the end there? The Supergirl she couldn't give to the girls who came into her store? Things are looking a lot brighter these days. First came the Cosmic Adventures in the 8th Grade limited series, and just recently, the main title got a big dose of sanity in the portrayal of Kara by Renato Guedes and then Jamal Igle. Look! It's a bird! It's a plane! It's a plausible teenage girl!

Since I'm not actually reading the series at the moment, I discovered this development via news of the tempest-in-a-teapot "controversy" over Igle's drawing her with bike shorts under her skirt. (No, really. People got very riled up about this. It even got a news mention on NPR. I blame Ed Benes, because it never would have occurred to anyone that she didn't at least wear cheerleader-type spankies if he hadn't perpetrated this. *beat* Okay, it wouldn't have occurred to anyone with a lick of sense.) And what with the reversal of the Incredible Shrinking Top and Skirt, I'm gradually warming up to the current costume.

But for my family-event icon, I'll stick with the classic. Call me old-fashioned. *g*

Or, better yet, come on out and meet the kids with Gotham's Finest.
Song for Today (way too long since I did one!): What else? "SuperGirl" by Saving Jane. I'm actually fonder of their previous single, "One Girl Revolution," but this one's a lot of fun too. Best known as the theme song of Olympic gymnast Nastia Liukin. Who seems to have more than a little Kara Zor-El in her too.