Where there's a Will

In which our Diva blogs for Shakespeare's birthday


About six weeks back, NPR's All Things Considered ran a piece on Cliff's Notes entering the digital age with a series of viral videos targeting their student consumers. The story included several disparate opinions on whether this was a good, a bad, or an indifferent thing, as such a story should. The closing interview was with the author of the Cliff's Notes for Hamlet (or possibly Macbeth; I can't remember which, and I can't find the story on NPR's website), who made the point I tend most to agree with, that the purpose of both the videos and the traditional Cliff's Notes guides really is to get students interested in the real material, not to encourage them to skip it.

The way she said it, though, bid fair to give me hives: "If we can get these kids to get a DVD, or better yet, read this wonderful poetry..."

That was about the time I pounded on my steering wheel and yelled aloud in my car, "No! Sitting and reading  it is NOT better! This is why people are afraid of Shakespeare in this country!"

(It's a very good thing I was alone in the car. I'm sure I looked like a complete lunatic to anyone outside of it.)

When I was invited earlier this week to participate in the "Happy Birthday Shakespeare" blog project, that moment was the first thing that came to mind.

Now, if you're a regular reader of this blog, that reaction probably won't surprise you. You already know I don't do well with sitting and reading poetry in general. I know that some people can happily sit and read Shakespeare or poems or whatever silently to themselves just as I would with a novel. I rather envy them. I can't do it. I'll just sit there the whole time thinking "these words are made to be heard," rather than think about what the poetry itself is saying.

Shakespeare, most especially, is meant to be heard. And nobody actually told me that until I was in college. Which is much, much later than they should have, although I was one of the lucky ones, because I had already figured it out for myself. Zeffirelli's Romeo and Juliet, of course, and whichever I could get my hands on (on VHS, in a very small town, in the 1980s) of the BBC productions from the late 70s and early 80s.

When I saw the story enacted, but really most especially when I heard the words, spoken by voices and informed by minds and hearts that knew and felt what they meant, they never made less than perfect sense. All the footnotes in the world can't fill in the nuances of an unfamiliar word the way the human voice can. Shakespeare wrote for voices, to be heard by audiences who largely couldn't read, the words on the page never intended to be anything but a record and a memory guide.

That they have become more than that in the centuries since, of course, is added value. I'm certainly not contesting that, and studying Shakespeare as the written word has led to countless insights into how our minds work, how language evolves, and even whether one man wrote all the words in question. But, meaning no disrespect to those whose passion for the canon lies in it as the written word, it makes me a little nuts that somewhere along the way the added value all but eclipsed the central purpose, at least in the way people meet Shakespeare in our society.

In modern American life, all classical arts are seen as musty and dusty and elitist and difficult to understand, but  with Shakespeare there's this extra layer of challenge because it isn't just that people haven't tried it. They think they've tried it and don't like it, because somebody made them sit and read it. And you can't get them into the theatre because they think it'll feel like that did. Who can blame them?

Not to say that's how it always is, of course -- one of my best friends is a high school English teacher who makes sure her students experience these fantastic plays as much as possible in the way they're intended. Chicago Shakespeare Theatre, like so many companies, has a great outreach program for students to experience their productions, in their incredible Courtyard mainstage space. Filmmakers go back to the Shakespeare well over and over again, for both beautiful productions of the actual text or fascinating updates, more and more with young stars and young sensibility, with the energy to take all those extraordinary words into the next century and beyond. 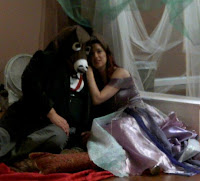 I played my first Shakespeare role -- Mariana in Measure for Measure, of all things, and a more problematic play you won't find in the canon -- in 1994. I played my most recent -- Titania in A Midsummer Night's Dream, fulfilling a longstanding dream of my own -- last summer. I've been very fortunate to almost always do Shakespeare in intimate spaces, where I can look the audience in the eye. Where I can see young people who've never seen a Shakespeare play (sometimes never a play at all), or adults who never thought they'd like one, light up with understanding at this bawdy joke or that soul-touching insight, even as the words are being spoken.

So happy birthday, Mr. Shakespeare. I'd have brought a gift, but there's nothing that wouldn't look silly next to the one you gave us. I hope I have the opportunity to keep sharing that gift for years to come, in the way it was meant to be shared.

Visit the Happy Birthday Shakespeare home page for links to dozens of other bloggers sharing dozens of perspectives on the man and the words and the plays. Big thanks to them for asking me to join in!
Posted by Unknown at 5:16 PM

Thank you for sharing these reflections. I've always found the sonnets easier to read (that is, on the page, silently) and understand than the plays, and it took me years to figure out why that was.

Thank you for reading them! As with any time I make a commitment to write something for a specific purpose in a specific timeframe, I felt a bit at sea when it came down to it, and am still not entirely sure it worked. :-)