Paintings and poems and passion

In which our Diva has all sorts of inspiration

Look what I finally went to visit a couple weekends ago! 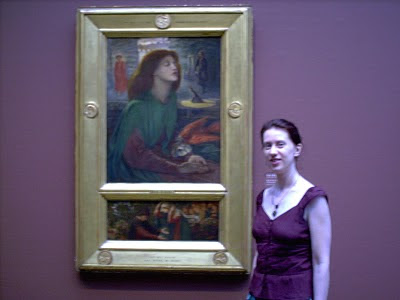 If you're not able to get to the Art Institute (which I highly recommend if you can), you can get a much better look at the painting on their website. For the benefit of those not mildly obsessed with the Pre-Raphaelites, it is of course Dante Gabriel Rossetti's Beata Beatrix, famously regarded as a posthumous tribute to Elizabeth Siddal after a long engagement, a shortish marriage, a lot of drama, and an early grave.  The one here in Chicago is actually the second of three versions in oils, and the only one with the additional panel at the bottom. There are also at least one watercolor and a charcoal sketch. (The significance of his returning to this image so many times -- not that it's the only time he did that, but it's probably the most consistent -- is an open question tackled by many a biographer and art historian, and well beyond the scope of this post. *g*)

If you've been around this blog a while, you know that I've been trying to write a one-woman show about Lizzie for... kind of a ridiculously long time, actually. If you have no idea what I'm babbling about, click the "lizzie" tag to catch up.

One stumbling block I keep hitting in my progress on the project (which has actually kindasorta been progressing recently, albeit in a few rather stream-of-consciousness chunks that remain light-years from performable) is that I have very limited patience for sitting and reading poetry.  Dunno why, exactly, but it's exactly like trying to sit and read Shakespeare. Which is to say, mostly pointless.

So the other day it finally occurred to me that what I needed to be doing was listening to poetry. There are lots of bits and pieces of various people's poems -- Lizzie's own, Gabriel's, a few of Christina's, plus the Tennyson and Blake and Shakespeare and Dante that constantly hung in the air at Chatham Place -- that I know how I want to weave into my script, and I know there are lots more waiting to fire the right synaptic connections.

I would just like to take this moment to point out that LibriVox is AWESOMECAKES.  Not that I didn't already know that, but I have discovered it all over again, and now I want to send all the volunteer readers pie.

Not quite as useful, but deeply cool in a spooky sort of way, is this YouTube channel I stumbled upon called Poetry Animations, where someone has digitally animated vintage images (mostly of the poets themselves) to readings of all manner of poems. They're less freaky than the talking baby on those e-trading commercials, though in some cases only slightly less so. F'rinstance, this one that uses Holman Hunt's portrait of Gabriel, which I've always found slightly freaky anyway. (Though I rather suspect the actual subtext happening on the day was less the apparent "I am looking right through your soul!!" and more "Bored, bored, for God's sake, are you done yet? BORED.")

All in all, I've had quite good luck... with everything except Lizzie's own poems. If anyone has recorded them, I can't find it. Looks like I'll have to do it myself. Woe. ;-)

In the process of my hunting, I had the idle thought that the BBC could probably make a bundle with an audiobook of Aidan Turner, who played Gabriel in their Desperate Romantics series last year, reading his poetry. Then I looked at the official site and discovered that they sort of figured that out, only they just put Turner on a windowseat in costume and filmed him performing six sonnets, one for each week the show aired. Like most BBC web media, alas, the videos are not available outside the UK, but if you're there, check 'em out.

The series has just come out on DVD Stateside, and I love it to bits in all its completely irreverent and historically-cavalier glory. I was already a fan of Turner's work on Being Human, and his Gabriel is highly entertaining as well, but it's always been the women of the Pre-Raphaelite circle I found most interesting, and the three primary ones in the series -- Lizzie (Amy Manson, who has since been great fun to watch as Daisy, the free-spirited and pragmatic vampire introduced in Being Human's second season), Effie Millais (Zoe Tapper, who had me at Nell Gwyn in Stage Beauty), and Annie Miller (newcomer Jennie Jacques, who could not be more adorable if she were made entirely of puppies) -- don't disappoint. I know some of my fellow PR-ophiles have insurmountable issues with it, but if you take it for what it is, it's a rollicking ride. And not without its moving moments too, genuine in spirit if not in the letter of the facts.

My favorite is unquestionably the montage near the end, after Lizzie's death, with Hunt and Millais contemplating their studies of her as Sylvia and Ophelia respectively, while Gabriel feverishly pulls Beata Beatrix from a blank canvas. I don't even care that the reproduction is pretty dodgy, bearing little resemblance to either the real painting or Amy Manson. (Mind you, the real painting is generally regarded as not a terribly accurate likeness of Lizzie either, so that sort of works in a weird way anyway.) I cried like a big ol' sappy sap, and don't care who knows it. 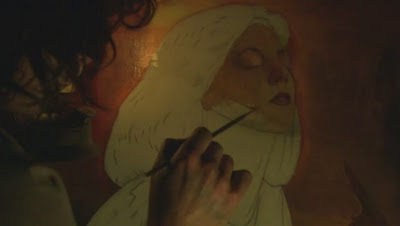 I feel compelled to back you up on your love of Desperate Romantics! The production etc is so- what's the word? Patchy? But the characters and general ethos were brilliant!

I feel slightly fraudish to be someone who has only just started liking the paintings AFTER the TV show but what the hell. Have to start somewhere.

Katherine, that doesn't make you a fraud at all! It just means the show achieved one of its goals by getting people interested in the art who weren't previously aware.

"Have to start somewhere" is exactly right. Why shouldn't it be a fun soapy TV show as much as an art history class or a book?

Most opera singers I know will freely admit to starting with Bugs Bunny cartoons just like the rest of us! :-D

Thanks so much for commenting, and I'm glad you enjoy reading.