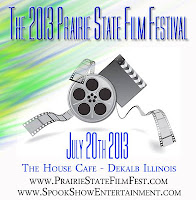 Update to the news in my last post: Due to the change in management at the previous venue, the Prairie State Film Festival has been rescheduled for July 20, and will be held at the House Cafe in DeKalb, Illinois. It's a more intimate venue, with plenty of character all its own, and I'm still looking forward to hosting the festivities..

Advance tickets are only $7. If you're in the area, consider spending a day enjoying some terrific independent films, a couple up-and-coming standup comics, and maybe a surprise or two. And please come up and say hello!

I spent last week adventuring in the wilds of northern California at the Actors' Retreat led by "unconventional coach" Molli Benson, an experience I'd recommend to anyone looking to cut through to the core of their truth and bring it home to their work.

While I was preparing to travel, we heard the welcome news that Witchfinder had been selected for the Gen Con Indy Film Festival The festival is part of the enormous Gen Con Indy event held every August at the Indiana Convention Center in Indianapolis. Known as "The Best Four Days in Gaming," the convention has kept its game-oriented roots while growing into a broadly appealing event for sci-fi, fantasy, and horror fans.

The film festival offers independent filmmakers an opportunity to appeal to that large audience -- an audience I've always been part of anyway! I'm always excited by film festival news, of course, but this one gives my geeky side something extra to squee about! If you're a Gen Con attendee, I'll probably bump into you in the exhibit hall, and I hope you'll take some time to check out the film festival too!

No sooner had I landed back in Chicago when I learned that we've also been selected for Fright Night Film Fest, July 26-28 in Louisville, Kentucky. I don't know yet if I'll make it to that one, but I'm looking into it. This one is also part of a larger event, with one heck of a lineup of celebrity guests. So again, if you're headed that way, why not poke your head into the film festival and watch me get my evil on?
Posted by Unknown at 8:52 PM