In which our Diva may be exaggerating just a touch with that subject line, but is still having an awfully good time 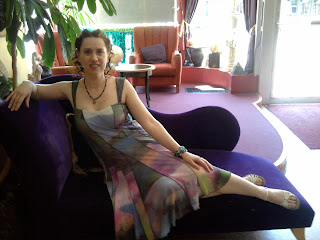 My first experience hosting an awards ceremony (along with the rest of the Prairie State Film Festival) was great fun, evening gown, sparkly jewelry, and all! I saw some terrific films and met some great new people. Thanks to the tireless Willy Adkins of Spook Show Entertainment, which sponsors several festivals throughout the year, for inviting me to be part of the festivities!

This has been a bit of a tumultuous year for Spook Show, as the longtime venue for its events, the historic Portage Theatre in Chicago, went through several months of rather public change-of-ownership drama before, sadly, closing its doors. The PSFF, originally slated to be held there, was moved to the House Cafe in DeKalb, which had not only friendly staff and great food, but the most awesome purple couch known to humankind. I couldn't resist perching for a photo during a festival intermission - it even went with my dress!

Speaking of festivals, Witchfinder's adventures on the indie circuit are now booked through September, with the addition of Dragon*Con in Atlanta and Halloween Horror Picture Show in Tampa added to the itinerary. Be sure to like the Witchfinder Facebook page to keep up with all the latest news, and hopefully a chance to see it near you!

Next up, though, is our Illinois premiere, in the Rockford hometown of writer/director Colin Clarke and most of our cast and crew! The Mosaic World Film Festival is this Saturday, August 3, and I'm looking forward to seeing Witchfinder on the big screen with our whole team. Chicagoland folks, come out and join us! Tickets are just $5, and will be available at the door starting at noon. Looks like some great stuff lined up, including good friend (and Raymond Did It writer/director) Travis Legge's latest annual zombie short, Li'l Bub.
Posted by Unknown at 2:45 PM