The ghosts of Lizzies past

In which our Diva considers those who have walked a particular path ahead of her, on the occasion of meeting one of them

Okay, they're all alive, so "ghost" is rather a misnomer, but as Unvarnished continues to take shape (in longhand, making this Tumblr post a relevantly giggle-worthy observation), I can hardly help being a little haunted by them!

The one I saw first and know best is also the most recent: Amy Manson in Desperate Romantics. However fast and loose the series played with history, I loved its complicated and ambitious Lizzie, and Manson's performance made me an instant fan. I'm delighted to see her career growing, and wish I could have seen her well-reviewed turn as Nora in A Doll's House at the National Theatre of Scotland this past spring.

(Maybe someday we'll get something that gives the women of the Pre-Raphaelite circle the rounded portrayals they deserve without being quite so thoroughly ahistorical. A girl can dream.) 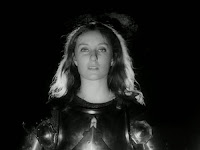 Mind you, the 2009 series' flights of fancy are nothing next to Ken Russell's take on the same events a generation earlier! His 1967 Dante's Inferno is unapologetically theatrical, veering at times into psychedelia (yes, you can do that in black & white, at least if you're Ken Russell) and at others into music-hall or panto (what even is going on with Annie Miller?). In that context, the paradoxical mix of strength and fragility in Judith Paris' ballerina presence serves Lizzie well, if the film's narrative doesn't always.

In a 2011 interview, Paris recalled that Russell cast her based entirely on her physical resemblance to Lizzie. "I saw Millais’s 'Ophelia' in the Tate and thought, 'That’s me!' It wasn’t about talent; Ken didn’t care if I could act or not. I did a screen test and I told him, 'I’ve never acted  apart from at school and a few lines in musicals and I don’t have any training.' He said, 'I don’t care. I’ll make your performance in the editing room!' I was thrown from being a dancer to playing opposite Oliver Reed on the BBC, which was one giant step for mankind!" I particularly cock my head at this apparent keenness to match Lizzie's physical appearance, when his Gabriel was Oliver Reed. (Actually, the fact that the same historical person has been played by Oliver Reed, Ben Kingsley, and Aidan Turner, all of whom work quite well for various reasons, makes me go full quizzical-puppy.)

Until recently, I had known her only from a favorite classic Doctor Who story (that's her under Eldrad's pretty blue scales in "The Hand of Fear"), but she's had a distinguished theatre career, and I've been particularly delighted to learn that she has written and performed several one-woman shows about historical figures over the years -- just as I'm trying to do with Lizzie!

Between these two, in 1975, came the most elusive dramatization (like the other two, from Auntie Beeb), the six-part The Love School. To this day, I (like the rest of the online Pre-Raphaelite community) have seen less than seven tantalizing minutes:

Yes, that Patricia Quinn, the one who created the role of Magenta in a certain "science fiction double feature" that was immortalized on film the same year.

Which is how I came to meet her this afternoon, at the Flashback Weekend horror convention. I couldn't make it to the Rocky Horror Picture Show screening she hosted last night, but I made it over there today, and found a surprisingly short line at her autograph table. I had no idea if this was a role she had any particular fond recollections of, but when I opened my Lizzie journal to a page for her to sign and explained what it was, she lit up and chatted about it for a good ten or twelve minutes!

"I have it," she told me with a conspiratorial grin. "I have the whole thing." Apparently a friend who worked in the production office managed to get hold of it for her some years ago, a minor miracle for anything made in the days when the BBC routinely aired shows once and then tucked them away to (as any Doctor Who fan who knows about the legendary "lost episodes" can tell you) vanish into the storage abyss or even be taped over.

But The Love School is safe and sound in its Lizzie's home -- something that impressed even its director, who had never been able to get his hands on it! -- and apparently she got around not too long ago to watching the full series, instead of stopping after Lizzie died. After all these years, she's downright gushing about how marvelous a production it is, with particular notice of its William Morris.

My favorite bit of the conversation was the anecdote about the day she, Richard O'Brien, and another RHPS castmate (she mentioned first names, but I don't remember the second one) did some sort of Q&A session at the Oxford Union. On the way over, she happened on Ben Kingsley -- her Rossetti -- in the street, and chatted briefly with him. Then, at the event, she looked up at the murals painted in that infamous adventure of the late 1850s (Dear Gabriel: When working in an unfamiliar technique, research is your friend!), "and I thought, 'That's me!'" Apparently there was a sequence in the series where "we were all in there painting away" that I, for one, would give minor body parts to see! Mind you, that was the point where I made the dubious step of mentioning Desperate Romantics (in the context of my disappointment at its eliding that whole process -- which could probably easily make a feature film in itself -- into Gabriel painting a single church panel alone), of which she is... not fond. And not shy about saying so. Partly because of its inaccuracies, but also, I think, a bit because "I was asked in for it, you know. They had me read for Ruskin's mother. And I said, 'Ruskin's mother??'" I cannot capture the indignation of that in text, but I'm sure you can imagine!

All in all, she is a thoroughly delightful lady, and I heartily recommend meeting her if you have the opportunity.

And now I have someone else I need to finish writing Unvarnished for, because she said she'd like to hear about it when it's finished. Best get back to work, then...
Posted by Unknown at 10:35 PM

I saw Judith Paris in a production of Coriolanus at the National with Ian McKellan. Unfortunately, the production itself was...not good.

Alas, that can happen, even at the greatest houses. :-} Sometimes it's almost worse when poor productions have brilliant actors!