In which our Diva remembers

Thirty years ago today, about ten minutes into chemistry class, the phone rang.

Before that moment, I don't think any of us had really noticed that there was a phone in the science room. We all stared, bewildered, as our teacher walked over, picked it up, listened silently for a moment, and put it back down. Then, still without a word, he pulled out the TV cart and turned it on.

I don't remember hearing a word spoken for at least an hour that didn't come from that TV. There might have been an announcement over the PA at some point, but if so I didn't really register it.

It took several minutes to grasp what we were seeing, that somewhere in that enormous plume across the sky -- too big, all wrong -- were the atoms of what had been seven brave, excited people.

He never said, but I can't imagine Mr. Underwood didn't apply for the seat Christa McAuliffe sat in that day. The man who hosted the Science Club at his own house, playing an old 45 of "They're Coming to Take Me Away" at the beginning and end of each meeting, presiding over discussions of when we would next take the Van de Graaff generator over to the elementary school to raise little kids' hair or how one might build a working lightsaber. The one who nominated me for both my Society of Women Engineers awards, even as I was realizing my career path led through all the stories I had to tell.

But I knew that plume was all wrong, too big, because I had watched so many of them rise into the sky before. Most of us in that class were born the year Neil Armstrong walked on the moon. None of us remembered a time when the countdown and the ignition and the rising column of smoke weren't events to look forward to on TV, to hope they fell on teacher in-service days during the school year, to tape when VCRs became a thing. The "send a civilian to space" idea happened because the public was losing interest, a fact that was utterly baffling to me when I read about it.

When I was a little girl (big enough to know that "pirate" and "Jedi" weren't actual options, but before I figured out they came under the heading of "actor"), I wanted to be a ballerina or an astronaut. Preferably both. By 1986, three years into a twelve-inch growth spurt that threw my center of gravity so far off I didn't find it until I was about 25, "ballerina" was pretty firmly off the table. But "astronaut" was still very much in the mix, alongside a few other options that had cropped up over the years. I was even considering applying to the Air Force Academy the following summer, for the sole reason that it was how you got to be an astronaut. (Well, one way. But Annapolis was two time zones away while Colorado Springs was at the foot of a mountain I could see from atop the swingset in my back yard. Besides, I was an Air Force brat, and "Navy wings are made of lead." *g*) 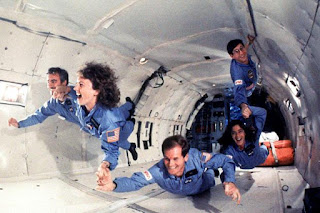 When this anniversary comes around, there's a lot of talk about how the loss of Challenger and her crew changed NASA -- made it more cautious, made people start questioning even more whether we should be doing all this in the first place. It wasn't the first accident, but it was the first I remember seeing with my own eyes. The first to to happen when space travel had become so seemingly routine that we were sending a social-studies teacher up there.

That caution was, and is, all to the good. As much as we might yearn to stand on Mars tomorrow, we need to be careful.

These people should be celebrating this anniversary with their families. They should be telling their children, nieces and nephews, grandchildren what the Earth looked like from orbit on that January morning.

They are immortal, but they should be home. Our pioneers should not be martyrs, not if we can avoid it.

But we still need our pioneers. 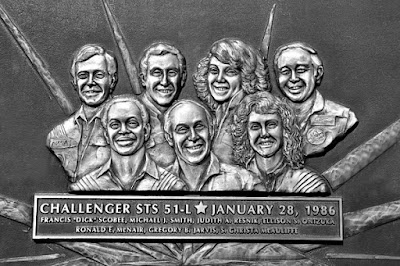 Labels: memory lane, people who inspire, tell me a story