Around the next corner

In which our Diva did not see that one coming

Was supposed to do a fun vintage-style photoshoot today. Unfortunately, my body had other ideas, as I woke up with a hacking cough, pounding headache, and 101.3-degree fever. Didn't I just do this a month ago?? Photoshoot duly rescheduled, fingers crossed that I'll be better in the morning to start shooting My Cousin Radu.

This post, however, is not to complain about my health. It's to remark upon The Audition, the absolutely captivating documentary about the finalists in the 2007 Metropolitan Opera National Council Auditions that ran on PBS the other night. 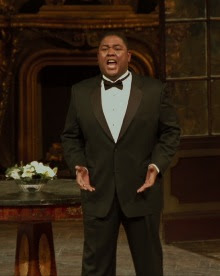 All the singers are amazing, of course, and you absolutely root for all of them. But one tenor, Ryan Smith, stood out as a bit of an underdog. At 30, he was several years older than most of the others, and had given up on an opera career for a while before returning to give it one more shot. Early in the film, he explains that he told his mother he was going to give it two years full-out, and if it didn't happen by then, he'd go back to finish his doctorate and teach or whatever.

It happened. He knocked the judges' collective socks off, brought tears to the eyes of the Met vocal coach watching from the booth, and went home with one of the six $15,000.00 prizes and a huge heartwarming grin.

As so often happens with this sort of documentary, there's a "one year later" montage at the end, outlining how each finalist's career is taking off. In the midst of this parade, the text notes that Ryan Smith made his Met debut in a featured role, and "is now fully committed to an opera career."

Then comes the sucker punch. At the very end, there's one more screen, with a still of him with that wonderful grin, and text dedicating the film "in loving memory of Ryan Smith, who died in November 2008 after a year-long battle with cancer."

I already can't breathe very well today. Bursting into tears did not help. Nor, particularly, did wailing "Not fair!" for the next three minutes.

And it's not. He will never have the career and life that every instinct says he should have.

But this is also true: He sang on the Met stage, with the Met orchestra, and a happier human being was never captured on film.

Seize your dream. It may not happen quite the way you envision, but you will make something magic happen. Recognize and cherish it when it comes, and then reach for the next.