Super-dog to the rescue!

I should theoretically be exhausted and/or stressed, but all the stuff going on is under control and it's all stuff I love. And one of the keys to this game of Schedule Tetris that I often find myself playing is to make the most of the pockets of downtime. I always have a dozen projects I could be chipping at when I have a couple hours, but sometimes the wisest thing to do is just plunk on the couch and, say, watch 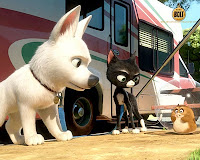 Bolt, which I hadn't seen before. And which is very cute, funny, and occasionally sniffle-worthy. If you're a sap, anyway, which I freely admit I am. I'll sit there with tears welling up through the most blatantly manipulative stuff and thank you for it, as long as there's an ounce of sincerity. What's the point of a story if I'm not going to ride the ride where it takes me? (Without wanting to give too much away, though, I have to say the ending is maybe a little ironic coming from Disney, the biggest child-star factory on the planet.)

It's funny to say, but sometimes popcorn entertainment can function as meditation, which to me is anything that clears the mental sinuses and sets me back to center. Other times, what's called for is a nap, or dancing, or housework. Seriously, just vacuuming and letting my mind wander its way over whatever? Love it.

After the movie, I got around to pulling out a bunch of clothes (possible wardrobe for a shoestring-indie feature I'll be shooting at the end of February) and snapping pictures of them to email to the director. Which I had known all day I needed to get done, and which just loomed as this huge, complicated undertaking in my head, until a couple hours of animatey goodness recalibrated the meter. The mind is a weird and wonderful thing.

Off to make an early night of it now, before a marathon callback tomorrow, for a play I very much want to do. Need body and mind ready for movement, fight work, and reading. No matter what the outcome, it's guaranteed to be an amazing day.
Posted by Unknown at 9:49 PM