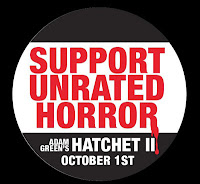 Some of you lovely folks follow the horror blogosphere, but I think most don't, so you may not be aware of the buzz around this weekend's watershed release of Hatchet II.

What makes it watershed, as discussed in more detail in this article over at Dread Central, is that it marks the first theatrical release of an unrated horror movie in over 25 years. If the experiment proves financially viable for AMC Theatres, it could pave the way for commercial release of more envelope-pushing independents, with their content intact, on big screens.  The current discussion is centering on horror, obviously, but the ripples could be felt in other genres as well.

Now, maybe none of this is your bag. Maybe it makes no difference to you whether that edgy film with the niche audience turns up for a day or two at an art house if the filmmakers are lucky, or just goes straight to DVD... or maybe, just maybe, occupies a showing or two a day on one of the 20 or 30 screens in the typical suburban multiplex. And that's just it: If you don't want to see a movie, it makes no difference where you don't see it. But for those who do want to see it, and for those who made it, that single screen for a few hours a day makes all the difference in the world.

We're not talking about blockbusters here. We're not talking about tearing down Western civilization as we know it. (Though I'm sure it'll be about 45 seconds before someone takes that position, if they haven't already.) We're talking about one more little chink in the homogeneity of an industry dominated by international conglomerates whose corporate hive minds only comprehend numbers in the hundreds of millions.

Travis Legge, who directed me in Raymond Did It this past summer, is one of those filmmakers watching the developments with keen interest. He's lost a lot of sleep in the last few months, making apparently arbitrary edits, just to get the all-important MPAA green band for a trailer.

I had the opportunity to see Cyrus: Mind of a Serial Killer at last weekend's Chicago Horror Film Festival, but it didn't occur to me until later in the week that we're probably in the same boat with that one. No rating was mentioned at the screening, and I don't know whether it's been submitted for one, but to my eye it's on the edge of what makes the R grade. Our Mark Vadik took home the festival's award for Best Director, and mentioned during a brief Q&A that we're now an Anchor Bay property, with release expected early next year. It remains to be seen what form that release will take, but you can bet the company is keeping a very interested eye on what develops from this Hatchet II thing.

Which brings us to a bit of a kicker: Everybody goes for the R because everybody knows it's financial suicide to release NC-17. Thing is, I remember when NC-17 was the "respectable" relabeling of the X rating, which had been thoroughly appropriated by the porn industry. (If you've ever run across the fact that the MPAA has trademarked their ratings, and wondered why, that's the reason.)  All either rating ever meant was "No children under 17 will be allowed in to see this."  Every other bit of associated baggage has alchemized out of the collision of conservative culture and marketing.  (You could get another whole article about the advent of PG-13 in the 80s, and whole books have been written about the Hays Code, for which the MPAA was designed as the forward-thinking, filmmaker-freeing replacement!)

In the long run, in the best case scenario of what indie filmmakers are hoping for, "unrated" will eventually become the new NC-17, and we'll have to play this game all over again. But in the meantime, maybe some films that deserve a life beyond the video shelf will get one.
Posted by Unknown at 9:46 AM