In which our Diva had a serendipitous week

Or most of one, anyway. First there was the reading of excerpts from the Divine Comedy, in the original Italian by classical actor Gian Paolo Poddigue and in the Longfellow translation by Storefront Shakespeare artistic director Nora Manca, who directed me as Titania last summer. I arrived to the reading a little late -- Benedictine could use a few campus maps! -- catching the first (English) pass through Canto V just as Dante and Virgil met Francesca da Rimini. I'd have been disappointed to miss that, not just because I didn't want to walk in on Nora's performance any later than I had to, but because the wallpaper on both my netbook and my Office of Doom computer is Rossetti's three-panel watercolor illustrating that very passage. (Perfect for a widescreen monitor! Lizzie's self-portrait works better on the 4:3 monitor on my home desktop.) 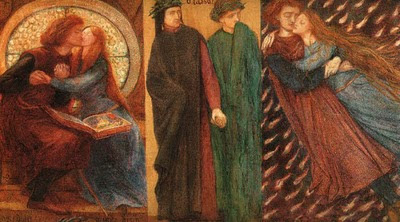 Something I read recently (can't recall at the moment what it was; I've long since passed the point where all the research sort of runs together in my head) asserted that DGR missed the point, that Paolo and Francesca weren't really in love, but just gave in to momentary lust, and were actually being punished by being trapped together in the second circle with the rest of the lustful. I thought at the time that that didn't seem quite right, but it had been too long since I encountered what Francesca actually says. Which certainly doesn't sound to me like it tracks with this person's opinion, whether in Dante's words or Longfellow's translation! Maybe they didn't like the idea of true lovers being damned just because of that pesky adultery thing?

I got to meet Gian Paolo briefly after the reading, and attempt to chat in my poco poco Italiano, but it's a bit too poco for much of a chat. It's enough to follow a bit of poetry with context or, better yet, a translation fresh in my head, so it was a lovely evening all in all.

In a similar vein, on Saturday I scored a side-by-side edition of Vita Nuova on clearance at Half Price Books for two bucks. \o/ Hopefully the translation is better than the one I picked up a few years back, which I was unable to read due to its being BORING AS LINT, and which went in the donation pile after three attempts.  Of course, if this one isn't better, I can jump to the Italian for a challenge.  It joins the gorgeous blank book, bound in red paisley brocade, that I picked up there on my last trip for Lizzie-related jottings and sketches.  It's been christened with a few of the former, but I haven't quite attempted the latter yet. It's been ages and ages since I was drawing regularly, and I need to get back in the habit.

The final bit of serendipity came this morning on Twitter, when I unexpectedly heard from Lucinda Hawksley.  She's the author of the biography of Lizzie that languished on my Amazon wishlist for about four years before I happened on Stephanie Pina's interview with her on LizzieSiddal.com, and discovered that it was available under an(other) alternate title. I was having a brief conversation over there the other day about the one-woman show project, and guess the mention of Lizzie's name came up on Lucinda's radar. So chalk up another interested -- and interesting! -- party looking to see what this thing becomes. Keeping me honest and keeping me working!
Posted by Unknown at 10:49 PM

Labels: crunchy process goodness, it's a small internet, lizzie, tell me a story