In which our Diva's DVD collection is growing again

Earlier this week I finally saw Agora, an extraordinary film that I didn't have the opportunity to catch during its brief visit to US cinema screens. I'd wanted to ever since I read about it at Women & Hollywood, both because I will happily watch Rachel Weisz do pretty much anything and because Alejandro Amenabar previously directed The Others, which is for my money the best haunted-house film ever made. 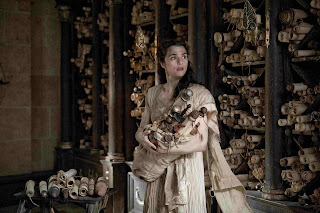 Agora, of course, is a completely different kind of movie, but no less beautiful, meticulous, or thought-provoking. It's one of those movies that make me thankful I don't have the mental wiring that makes people get huffy about storytellers taking dramatic license with history, because it's highly unlikely (though, as their astronomy consultant points out in the behind-the-scenes material on the DVD, not wholly implausible) that Hypatia of Alexandria actually hit on all the principles featured in the film. (I'm not even touching the anachronistic charge of "witchcraft," which made even me wince a bit, even while putting me in mind of my beloved Dangerous Beauty.) But oh, how magical to watch her grapple with those ideas, beginning with the soul-shattering leap of faith represented by the heliocentric model of the heavens -- coming to grips point-blank with the realization that we are not at the center of the cosmos -- and leading inexorably to letting go of the "purity" of the circle and placing Earth's orbit on an ellipse. Even more fascinating, she reaches the solution we know is correct (and know must be coming; if there's a conic section on the mantelpiece in Act 3, you know it'll be fired in Act 5! *g*) through the prism of the knowledge of her time, and therefore deduces a rather different model for "why" than that which Johannes Kepler bequeathed to us 1200 years later.

If the preceding paragraph has made your eyes glaze over, don't let it stop you from watching the movie, because it's not really about the science. It's about Hypatia's passion for the science. Which, if you look at the posters and most of what was written about it when it came out, is fairly obvious. 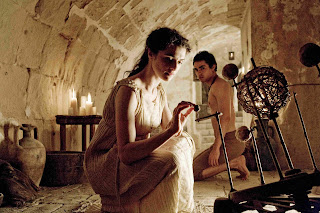 Then a funny thing happened, and it seems to have happened in the U.S. distribution phase. First, there's the redesigned-for-American-market DVD cover. Then the synopsis on IMDb, and the one on the DVD envelope from I got from Netflix, tells us that it's about a slave named Davus who, among other things, falls in love with his mistress. The Netflix synopsis doesn't even name her.

Now, I'm the first to agree that Davus' journey in the film is as rich and complex as Hypatia's, and I'll definitely be keeping an eye out in the future for more from Max Minghella, whose performance absolutely makes it a compelling journey to follow. I'd certainly go as far as to call him a second lead. But Davus is not the center of the film. He's one of several men in Hypatia's orbit, none of whom is her lover (albeit not for lack of trying), which is even more baffling to the Hollywood mindset. She is explicitly described by several of the creative team in the documentary material as the sun at the center of the film's cosmos, and I can't imagine watching the film through and not coming away with that impression.

The other thing I find a bit depressing (albeit unsurprising) is the amount of commentary I've seen that interprets the film as anti-Christian. The comment thread on on the trailer on YouTube has voices both agreeing with and offended by the perceived condemnation. But there is no such condemnation. There is a great deal said about how bringing religion into the political mix makes it that much easier for human beings to rationalize their own abuse of power.

Have there always been so many people who don't know the difference between the two? Certainly in the fifth-century Alexandria of this film, that would appear to be the case. And that's the larger tragedy, above and beyond the death of one brilliant and committed woman.

Thanks for reminding me about the movie. I saw a trailer but it didn't air around here. Looks really interesting.

I gotta check this out. Thanks for sharing! And btw..typically when "the arts" and science collaborate to illustrate and explain wonders, religion gets jealous and has to pee on it. IMO

Lady P: Or those who think they understand religion do. :-/ I'm more disappointed in the people whose takeaway is "See? Christianity is bad!" and who find that a good thing for it to be saying. Which I really don't think it is.

I do think you'll enjoy the movie, though. It really deserved WAY more attention than it got.