On a shelf in my spare room closet, there are four hatboxes full of vintage hats, mostly from the 50s and 60s. A few belonged to my grandmother. Several more (and two of the hatboxes) came from a friends' parents' garage sale a few years ago. And there are a couple I honestly don't remember how I came by.

I seem to accumulate metaphorical hats in much the same way. 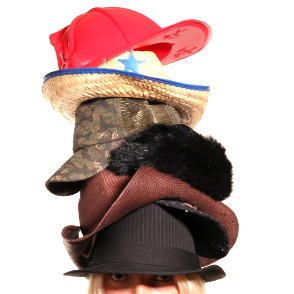 I'd be lying if I said I wouldn't love to have a higher proportion of gigs where I'm simply an actor.  Where I can give all my energy to showing up and playing my character, confident that all the other details are someone else's job and that someone else is doing it. But that's just not the career I get (at least so far), and mostly I'm okay with that.  Though occasionally I think I should have kept my big mouth shut before it uttered "I could..." *wry g*


Of course, if I haven't learned to do that by now, I don't think I'm going to. Way back in 1994, when arts organizations having websites was just a novelty, I put together the first one for Rosebriar Shakespeare Company, my second home for most of the ten years I lived in Columbus. A couple years later, I did the same for BalletMet Columbus, where my then-day-job was in an unrelated department of the admin office. Appropriately for a nationally-respected company, they've long since moved on to a far more sophisticated and professional site than I know how to design.

Which didn't stop me from opening my big mouth when Elgin Opera's need for an updated and integrated web presence became more obvious every time I tried to plug an event to my plugged-in social circle. Mind you, I can't complain about that one since (a) we got an infrastructure grant this year to pay me for it, and (b) at the end of a frustrating few months, I now know how to make Joomla do a number of things I didn't previously know how to make it do. Yay, knowledge!

For Scarlet X, I actually could have gotten away with just being an actor. And I could pretend that's what I'm doing, pretend it's a better-endowed project where a very small team isn't trying to do the work of a much bigger one. But you know what? They are, and they deserve credit for it. I'm not the only one stepping up to the hyphenate plate to make this thing happen. This weekend, that meant a bit of copywriting for the website (coming soon!) and promo materials, and discovering that capsule character descriptions (60 to 70ish words) are harder than they look. Still, I was here, I'm decent at slinging words around, and this way we're closer to having a website I can send you to. Everybody wins!

And then, every once in a while, a project happens because I'm a dyed-in-the-wool DIYer who can't keep her volunteering hand from shooting into the air. That would be Resonance, where my rather eccentric and eclectic mix of skills, interests, and thought processes happened to converge in just the right way at the right time to land me on a bus going some very cool places indeed. (About which I still can't really tell you anything, but there are a bunch of people doing a bunch of stuff that will start bearing fruit soon. Promise!)

There are stories to tell, stories I believe in. And when they need more from me than just acting, they feel that much more mine, that much more like home. I'll take that trade.
Posted by Unknown at 9:06 PM

Valerie, you were meant for great things. Like the ocean tide you are never still, you are always in motion and someone who inspires me.

Wow! Thank you so much!