We mind because it matters

In which our Diva is thoroughly disgusted, but also hopeful

Earlier this week, I tweeted: Andrew Wakefield made a fortune by lying, without regard for harm to others. Last I checked, the word for that was "sociopath." That's pretty much all I have to say on the topic. It will be years before we'll be able to calculate the damage done by the falsified study linking vaccines to autism, if indeed it ever stops posing health risks and lining the pockets of a whole legion of quacks preying on desperate parents.

Also in the last few days, there's a lesser-known (and let's pray he stays that way) sociopath by the name of Kenneth Tong tweeting an endless stream of hardcore pro-ana propaganda and touting an alleged "size zero pill" that will make everything all better. Never heard of him? Neither had I. Apparently he was on Big Brother for about seventeen seconds before getting booted for threatening a housemate. This post on the blog "A Very Public Sociologist" sums up quite well which rock this individual crawled out from under, what makes him tick, and why paying any attention to him plays into his greedy little hands. 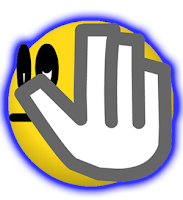 That last is why I hesitate to mention him at all, but I've come to the conclusion that it's important for a variety of reasons. I still refuse to link directly to anything of his, and have in fact set him to "blocked" on both Twitter and Facebook. Not that he would notice or care, but my hope is that a wave of users doing so will be noticed by the services in question, which are unfortunately unlikely to ban him regardless of at least one e-petition calling for it. (Not linking to that either, not because I don't agree with the sentiment, but because they don't work. Spend your energy elsewhere.) Unfortunately, I have no doubt that they regard him as nothing more than "controversial," and will continue to allow him a forum for what is nothing more nor less than hate speech. (If you don't understand why that phrase applies, spend an hour or two at Kate Harding's "Shapely Prose" archive. I used to add "and try not to say anything too ignorant while you're there," but then I stopped because it was fun to watch her take such comments apart. Unfortunately, she appears to have gotten burnt out on that -- and I don't blame her a bit -- but the archive remains a valuable resource.)

When references to him first popped up in my Twitter timeline a few days ago, my first thought was that it was some misfired attempt at "ironic" hipster misogyny, following the current trend in (so-called) humor of spouting things so outrageously, offensively bigoted that surely no one could take them seriously, so we must know the speaker is joking! That's apparently how you're supposed to tell that it's funny, and if you don't laugh, well, you must be the humor-deficient one. (Hint: No.)

I've since come to the conclusion that, while he might end up claiming retroactively to be up to something like that (see also: "It was a social experiment!"), there's nothing remotely so clever going on. Just some guy who may or may not understand, but certainly doesn't care, that he's doing very real harm just to get attention. And make no mistake, there is harm. Every single thing he's saying amplifies the tape already playing in the background for any woman who lives in our society, and which tyrannizes the lives of those living with eating disorders.

It may be a mixed blessing (due to the aforementioned giving him attention), but it's still cheering to see the virtually unanimous disgust in response. From high-profile figures like Rihanna and Simon Cowell, from less famous but still influential people like Being Human star Sinead Keenan and Doctor Who composer Murray Gold, and from pithy private citizens like this and this and many more. Like British educator Philip Edmundson, who's gone beyond the single-tweet statement to begin building a counter-campaign of sorts, including a link to this eloquent and heartbreaking blog post about just what it is Tong's comments are enabling.

Twitter is full of call-to-arms hashtags (enumerated and retweeted by the Kardashian sisters): #stunningnotstarving, #nosizezero, #curvesaresexy, #curvesarebeautiful. While I support the sincerity of those using all of them, I'm personally only using #stunningnotstarving, as I find the others problematic for a couple of reasons: #nosizezero denies the existence of the minority (however few) who are very small but healthy, and the last two are more positive but still imply a bit of exclusion. A woman of any size and shape can be stunning and not starving, so that's one I can take to heart.

What's sad and infuriating is that it took absolutely no effort for Kenneth Tong to seize his pathetic little bastion of power, because the structures are already in place. Every word he's tweeting is part of the basic formula women get from every direction every day they live in our culture:


So we can ignore Tong and his blatant "if you're not thin you fail at life" (by a definition of success at life that seems to consist entirely of whether you sleep with celebrities) all we want, but the message will still be there, and in more insidious forms. I'm not immune. Neither are women of my acquaintance who, even while expressing their disgust with Tong's comments, had the courage to admit he affected their food choices that day.

Which brings me to the good news: Long before this creature crawled out from under his rock, the opposition was in place. And it's gaining momentum. In the BodyHeart Campaign, which also came to my attention via Twitter, thanks to Dollhouse star Miracle Laurie. In the Viola Project, bringing out the power of young women through the power of Shakespeare's words. In the increasing public awareness of the extent to which fashion images are retouched and manipulated, which is just beginning to build into a backlash. In the documentary Superskinny Me, in which two British journalists discover firsthand the destructive consequences of the "race to size double zero" even under close medical supervision. And now in the stream of tweets calling Kenneth Tong out on his douchebaggerie, and the fact that they vastly outnumber the heartbreaking ones -- every single one accompanied by an avatar depicting a perfectly attractive young woman -- asking him where to get his magical miracle pill. (My money's on some of those being sockpuppet accounts designed to feed into the publicity machine, which is that much more disgusting, but might also mean that many fewer victims falling for his flimflam.) Edit: Thanks to long-time friend Mandy, who brought my attention to this amazing community of Harry Potter fans, who focus on a different real-life "horcrux" (the word for a type of curse in the HP universe) each month, and who happen to be discussing body image this month. Serendipity!

This issue is nothing new. It's not the first time I've blogged about it, and it won't be the last. It'll be back the next time the camel's back breaks, and I trust you'll bear with me.

Now, if you'll excuse me, I have a nice healthy dinner to cook. All that misogynist claptrap is making me hungry.

Song for Today: I know I've named Saving Jane's "One Girl Revolution" before, but I can't think of anything more appropriate or inspiring. Raise your hand!

P.S.: If I ever say to you, individually, that you're beautiful, you're gorgeous, you're anything wonderful I happen to feel like calling you? I'm not blowing smoke. I'm not just trying to make you feel better, or making empty noises to puff up your self-esteem. I'm saying it because I believe it is true, pure and simple. Contradict me if you absolutely must, but know that your energy would be better spent trying to teach a pig to sing. :-)
Posted by Unknown at 4:26 PM

Have I mentioned lately how I adore you?--HMM

You are awesome, my friend!

Thank you! And proud to be your friend.

A beautifully written post, Valerie. Thank you for the mention. We have to continue to chip away at this hideous man and not just let it disappear like so many social media campaigns.
Best Wishes, P

Thank you, Philip. "Ignore them and they'll go away" doesn't work with playground bullies, and it won't work with Kenneth Tong. Both instances are far more complex than those giving that well-meaning advice want them to be.

I hope by publicising him, writing about him and showing our absolute distaste will throw a bright light on his underhand, base and lascivious actions. We'll just have to keep on going.