I knew who I was when I woke up this morning

In which our Diva is once again thankful for Netflix recommendations 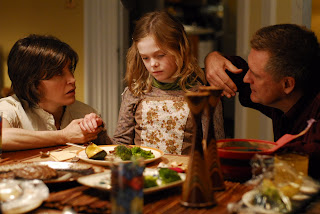 Watched the most unexpectedly extraordinary movie yesterday: Phoebe in Wonderland. It was actually my husband who picked up the recommendation, and the DVD has been sitting on our coffee table for a bit, since we've both been pretty occupied lately. But we finally sat down to watch today, and what we thought was going to be a lightweight tale of a socially awkward little girl finding a place to fit in her school play turned out to be quite a lot more complex. It quickly becomes clear that nine-year-old Phoebe (an engaging and achingly truthful Elle Fanning) is not just awkward, but exhibiting increasingly disruptive compulsive behaviors she can't understand or control. The adults in her life are well-meaning but heartbreakingly, humanly imperfect: The new drama teacher who can relate perhaps a little too well. The mother who hymns the virtues of being "different" and doesn't want her child "labeled." The father who says "we can choose not to do things that hurt other people" to a child who feels that choice repeatedly jerked out of her reach. It's hard to watch at times, with a frightened nine-year-old saying "I need help" over and over again, and so many times I just wanted to grab people by the shoulders and yell, "This is not a neurotypical child! Stop asking her to respond like one!" But it's full of moments of magic, too, and ends positively and realistically, with an actionable diagnosis and a recognition that it's just the start, but already so, so much better. 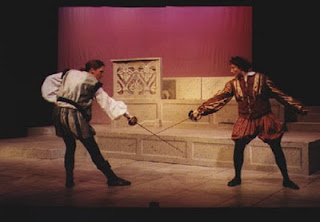 The film is amazing on its own merits, but also addresses something very close to my heart as an actor and sometime instructor. Several years ago, before moving to Chicago, I was involved with the Columbus Rec & Parks Davis Performing Arts Programs, assisting with costumes and teaching stage combat. (I still love the looks on some people's faces when I quip that the city of Columbus used to pay me to give swords to teenagers!) I'm thankful they're still around, though economic reality has forced them to scale down the class schedule and charge the kids to participate. When I was there, it was still free for any kid who lived in the park district (encompassing some suburbs as well as Columbus proper), and the Davis Center was the social hub for a slew of youngsters, some homeschooled, others just lacking another compatible outlet, as well as the place they learned skills and told stories that for many represented the first time they had done something that felt like it mattered. There are a dozen reasons it breaks my heart to see arts education inexorably chipped away, not only in our schools but in the alternative programs that arose to fill that gap, but this is probably the main one. I think of the kids I knew so well, who've grown into adults with amazing, fulfilling lives, and wonder what those lives would be if they hadn't been there.

Theatre (or sports, or whatever pursuit helps a kid to connect to what will make them a whole adult) isn't a cure for psychological issues, and another reason to recommend Phoebe in Wonderland is that it knows that. But for so, so many people, it is an incredibly valuable building block in an effective coping strategy. And (as the movies sometimes forget to tell you), it's not perfect. I think of the 14-year-old whose impulse control wasn't equal to my one-warning policy regarding weapons safety rules, and whom I was forced to remove from his part in the Romeo and Juliet street brawl as a result. He was still in the show, but he had to watch from the sidelines while the rest of the cast dusted it up to thunderous applause. And that wasn't comfortable for anyone, certainly not me.

I also think of the same kid coming up to me three years later to thank me for not letting him off the hook.

And lest we think it's just about my chosen art as an educational tool: I have so, so many colleagues who are adults with ADHD, depression, alcoholism, autism-spectrum disorders, you name it. Who are the counterparts of those kids, grown up and thriving, the ones for whom the coping tool grew into a vocation. Some of the most mesmerizing, intense performances I've ever had the privilege to witness have come out of people that, in most environments, are perceived as bright and nice enough, but difficult and exhausting to be around. People who might not last a day in the typical workplace. I've watched them take that chaotic energy and focus it like a laser, to create something phenomenal, because something in the way we work as actors has given them the tool they needed to do that.

You don't have to be crazy to be in this business. But sometimes it really does help. And not in the way that means you have to be tortured and miserable, either!
Posted by Unknown at 10:11 AM