You have no idea who you are

In which our Diva has a resonating good time in London


"Something is happening." Tantalizing words on the front page of the Resonance website, and the name of the event held in London last Friday to celebrate what we've been building for months (or longer, for a few of the core team).

Various "cells" of the project came together at Paramount, 31 stories above Soho, to share glimpses of their work. The beta version of a smartphone game app that will draw real-world locations into the
Resonance world (and which involves the "bee" graphics that now include the one I customized to represent the Chicago story, with the four stars of the municipal flag). The first comic story (yeah, eventually I'll accept that everything's a "graphic novel" now, but in my old-school fangirl brain that term still has a more specific definition, and I'm not quite there yet). Language and history background pointing up the global reach of the narrative being built.  The first live-action scene featuring ancillary characters created and fleshed out through the process that, now that the framework is created and tested, will soon be expanded to new communities.

At my little table, my Yank accent and I gave a peek into the wiki set up for my team to facilitate collaboration on the story we're building, a mystery at the nexus of Chicago politics, business, and organized crime, which will stand on its own as well as linking into the central narrative of Resonance and the trail of the mysterious Object.

Funny thing about explaining things to other people: it's often a great way to clarify things for yourself. What began as simply the best tool for the job -- a centralized place to develop characters and story elements -- has become a microcosm of the "open source narrative" philosophy of the project. And not just because the MediaWiki engine it's built with is open source software. 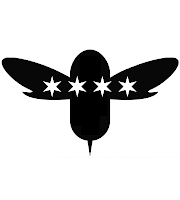 With each person's contributions, and especially the links between them that are so easy to create in the wiki format, the framework of the story grows stronger, the picture more complete. At more than one point in the afternoon presentation, I watched someone's eyes light up in comprehension, as they realized why a concrete notion of what Resonance is has been so hard to come by, that the nature of the project is that it is becoming more concrete through the contributions of the community.  Up to now, there's been a relatively small team, creating and testing a framework that will allow for the right balance of creative freedom and coherent storytelling. The framework into which we'll soon be inviting the wider community to come and create with us.

But there was more than that to talk about, in a room that buzzed louder by the hour with the energy of people from disparate disciplines, with a myriad of skills and resources to bring to the table, if they choose to help. Some arrived confident in what they had to offer and needed only the right place for it, like the virtuoso of simulated documents whose artistry I hope we'll be able to make use of for online clues and filming props.  Others didn't realize their own potential, a little stuck in workaday notions of "what I can do" or "what's useful." ("You have no idea who you are." K might mean something else by it -- or does she? Give the trailer another look and you tell me -- but the line keeps running through my head in multiple contexts, both within the story and with the real people I meet.)

It's this latter category who particularly interest me, and who I'm convinced will ultimately form the backbone of the Resonance community.  I talked a bit about it a few days later with the project's creator, Tom Hill, over Starbucks before we each rushed off to our next appointment, about how easy it is for talented people to get lost in the shuffle in the conventional entertainment-industry way of doing things, and how this project represents another way.

I mentioned a while back that my particularly eccentric and eclectic background has turned out to be more tailor-made for what I'm doing than anyone knew when I sent that first email -- and I don't just mean the stuff I'm qualified to do for a living. Gaming and fandom and a DIY mindset are no less important ingredients in my perspective than acting and writing.

Our story centers on a force that has inspired human accomplishment for millennia. Accomplishment comes from the recognition and development of potential. Which is also a darn good way to go about telling a big collaborative story. Pretty cool, huh?

There have been a lot of people in my life who helped me (not all of whom are still with us), whom I was in no position to repay directly. But that's not how it works, is it? The people who give what we need aren't usually the ones who need anything we have. But someone else does.

Helping to build the Resonance community gives me the chance to put others in reach of opportunity. That's as exciting to me as the storytelling work itself. I hope they take that opportunity and run with it, as far as they can, to a place where they can offer opportunity to the next bundle of potential. It doesn't get any better than that in my book.

It was quite a long day and evening coming straight off an overnight flight. By the end of the party I was cracking that I hadn't been in a bed in long enough that I couldn't do the math, which wasn't entirely true, but across six time zones I certainly didn't want to do the math!  With the buzz in the air, though, and all the warm cheerful bodies right in front of me who'd previously only been names online or faces on Skype, I hardly even felt tired until close to midnight.

The rest of my week in Britain was a bit of a whirlwind, but not as intense as that! And of course the rest was vacation, all visiting with friends and exploring museums and sights. Though there was still room for a chuckle at spotting our hero's enigmatic moniker on an electrical junction box. More proof that Resonance is everywhere! ;-D