Once upon a time

In which our Diva ventures into the deep, dark forest 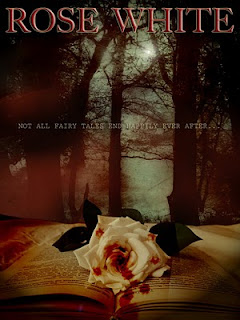 As I've been hinting for a couple days over on Twitter and Facebook, I've been sitting on some good casting news. With the green light from production, I can tell you I'll be playing Mother in Rose White, a dark fantasy retelling of "Snow White and Rose Red."  I'm a sucker for that sort of thing anyway, so it's doubly delightful to be a part of it, and if the concept art and promo photos -- which you can see at the official site and also on the film's Facebook page -- are anything to go by, this thing's gonna be gorgeous. (Also scary and disturbing, but those are pluses in my book.)

It's also a kick to be reunited with the lovely, talented, and very hardworking Deneen Melody, whom I met on Holiday Carvings, and who is branching out into producing for this endeavor. There's a great team on board for filming next month, and I'm excited to meet them all! 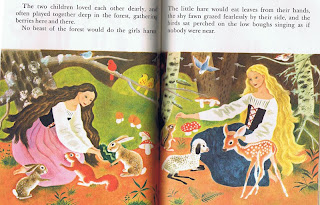 I always have to be reminded that "Snow White and Rose Red" is a lesser-known fairy tale, as it's one of my childhood favorites. It's in the Fairy Tales and Rhymes volume of the four-book box set of Little Golden Book compilations I've had as long as I can remember, and the Gustaf Tenggren illustrations are clearly imprinted on my mind's eye.  I just pulled it out and reread it for the first time in ages, and was struck by the calm practicality of the two girls, in the face of tantrum-throwing dwarves and unexpected bears. When life throws them curve balls, they do what they need to do. I'm not giving anything away by saying Rose White won't have the bright illustrations or the standard happy ending, but that core idea is very much intact.

It's one of those funny cultural moments, that this project was already in development when Hollywood went back to the fairy-tale well with Red Riding Hood and Beastly, but of course it's not a well that's going to run dry any time soon. (I had to just sort of stare at someone who thought a horror take on Red Riding Hood was something weird and unheard-of. No judgment on the new movie -- I haven't seen it yet, and I'm not a big fan of the "if it reminds me of anything anyone else has ever done it's pointless" mentality anyway -- but, um, that impression would be incorrect.) The impulse to strip away the protective coating from fairy tales and expose their often-dark hearts is a compelling one, fueling films, novels, and notably the long-running Vertigo comic series Fables, in which Snow White (who is also the one with the dwarves) and Rose Red have a very complex sisterly relationship indeed.

Song for today: "Rose Red," of course. The track that got me hooked on Emilie Autumn riffs on the folk song, which some people interpret as a veiled reference to the Wars of the Roses (for slightly more plausible reasons than the old saw about "Ring Around the Rosy" being about the Black Plague), and which in any case appears to be unrelated to the fairy tale. But I love it a lot, and it's a perfect auditory complement to the stunning Rose White promo art.
Posted by Unknown at 3:46 PM

Labels: my illustrious movie career, song for today, tell me a story