In which our Diva ruminates on a form that is more than the sum of its feathers, rhinestones and g-strings

I love Netflix recommendations. Sometimes they disappoint, but more often they bring my attention to a gem I would never have heard of otherwise.

Such was the case with A Wink and a Smile: The Art of Burlesque. Which, from the synopsis, I expected to focus on the rise of neo-burlesque, the revival and evolution of old-school burlesque that has enjoyed a mini-explosion the last few years. Not only in straight-up burlesque shows, but in influence on other arts. (Some more successfully than others. I don't have anything against groups like the Pussycat Dolls, but I'm not a big fan of their rather surfacey quasi-burlesque. OTOH, Emilie Autumn's show -- in part because one of her "Bloody Crumpets" backing group, Veronica Varlow, is a burlesque artist in her own right -- has a lot of burlesque in its mix, in a way that recognizes not just the raunch but the humor and irony.)

I first became aware of the movement in 2004, when I was costume designer for a play set in the 1950s that featured a classic striptease. In fact, that's pretty much how I ended up designing the show -- the actress doing the strip number was in another show with me, and was talking backstage one night about researching classic burlesque. I gave her a couple website leads (I don't even remember now why I knew about them, though I suspect it branched off from my love of Moulin Rouge), touched on a couple of the primary engineering issues, then interrupted myself in midsentence to ask, "Do you guys have a costume designer?" Turns out that, as often happens with newer small theatre companies, they didn't. 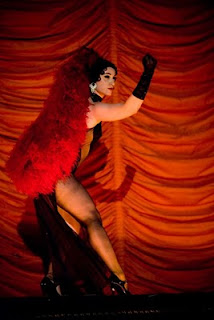 I had a blast working on that show, and the thrift store gods smiled on me with some fabulous vintage finds. I also learned that I still had a lot to learn about burlesque costume engineering, the most important thing being NOT to line the strapless gown with shiny lining fabric. Next time, a nice cotton broadcloth that won't threaten to slide right off the poor dancer! (I also should have gone ahead with a zipper instead of snaps down the side seam, but that was less of an issue.)

The choreographer for Jenn's number was Michelle L'Amour, one of the leading lights of the burlesque scene I didn't even know Chicago had. She's a founder of The Lavender Cabaret, which has been producing shows and teaching burlesque since 2003. I've thought about taking one of her classes a hundred times, but there always seems to be too much going on. (Same goes for the circus aerial training I'd dearly love to do at the Actors Gymnasium, or even just going to ballet class regularly again. Or a dozen other things. A lot of the reason I'm an actor in the first place is that I tend to look at people doing something cool and go "Oooh, I want to try that!" But I can still really only do one of them at a time. *wry g*) 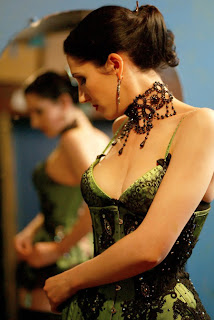 So it was a surprise and delight to find that this little documentary I'd rented was less about the burlesque scene as a whole, and more focused on Miss Indigo Blue's "Burlesque 101" class in the fall of 2007. The ten "ordinary" women are as varied as they can be in age, background, personality, and of course what they're looking to get out of the class. The interviews with the students and with Blue and her co-teacher are unflinchingly honest and insightful, illuminating the complexities and power (and yes, empowerment) of an easily-dismissed form. There are tears, laughter, and life-changing explorations from the students, and exceptionally intelligent and educated nuggets of history from Blue, who clearly knows her stuff and then some. If you never thought much about burlesque before, or even if you're somewhat familiar with it like me, you'll come away from this film knowing a whole lot more.

Thanks for the recommendation. I watched the trailer, and it looks like something I'd be interested in watching. I don't know if I'd try it, but based on the comments of Ms. Blue and her students, it does sound like the class and the art form puts these women back in touch with and in command of their sexuality. The same can be said for the modern resurgence in belly dance. Yes, it's sexy, but ultimately it's all about feminine power...the power of attraction, the power over men, but most of all the power of control over her own life and body. Anything that can help women feel attractive and powerful is a good thing, and badly needed.

Definitely. And it's very much about sexuality on their own terms, which is the main thing that sets it apart from the general run of modern "gentleman's club" stripping. My impression is that the latter commonly don't even strip anymore. Though there's reclamation of power happening in that milieu too, or at least parts of it. There was a Real Sex (the HBO occasional series) segment a couple years back with conventional strip-club strippers training with an old-school burlesque artist, and saying a lot of the same things I heard in this film. The same RS featured dancers from another club who got a new statutory restriction in their town by integrating a full production of Macbeth into their show!

In the first interview segment in the film, Miss Indigo Blue explains that she was a strip-club stripper for several years, and didn't tell her family. But when she got into burlesque, performing in theatre spaces for a vastly broader audience, she told them so they wouldn't find out from a newspaper interview. That pretty much says it all about the distinction.

Er, got around a new statute.