But then there was a star danc'd 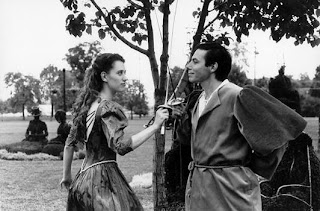 Thirteen years ago today, Much Ado About Nothing opened in a small black-box theatre in Columbus, Ohio. Yours truly, complete with flittery fidgets and Minnie Mouse voice, was playing Beatrice.

I'm still not entirely sure how that happened, but I'm eternally grateful that it did.

I hate choosing favorites in practically anything, but when people ask me my favorite role I've ever played, I don't hesitate a fraction of a second before answering "Beatrice." Even more true is that it is the one role I would most want to play again. Not just because of the character herself, but because I was given this amazing opportunity when I was 25 and clueless, and I would pay dearly to have it again with what I know now. (I hasten to add that this only means I was clueless at 25, having semi-recently dropped this nugget into a conversation with an astonishingly clueful 23-year-old colleague and then realized it was possibly on the tactless side.) I think that at least once a week, and it becomes especially acute when I encounter the play in any form, as I did last week with my friend and her brilliant little girl (who, as we had hoped, loved the movie and was tremendous fun to watch).

1995 was the year everything seemed possible. Rosebriar, the Shakespeare company I had stumbled into the previous season, and its gifted, giving idealist of an artistic director (who was also my Benedick), looked at me and saw great things. And for a few seasons, we had great things happening, we really did. John's inspiration and belief in me gave me more than I can begin to describe.

Hard on Beatrice's heels, I played Lucy Hale, John Wilke's Booth's fiancée, in a role written for me by the playwright/actor who played Antonio in Much Ado and shocked me speechless one night by comparing my performance favorably to Emma Thompson's. (I love you, Doug, but, um, no way.) That was the year I found Shakespeare & Company and my grownup voice, spent ten weekends dancing four Maypole shows a day in thirty pounds of peasant garb at Ohio Ren, carried a woefully underrehearsed The Skin of Our Teeth (not at Rosebriar) by the skin of my teeth on Sabina's stiletto heels, and played ersatz BDSM with Hamlet with my very Catholic 85-year-old grandfather in the front row three feet away.

But starting it all off, there was Much Ado. There's so much I remember so vividly about that show. I look at the quote list and remember what prompted every silly joke on it. Changing at panicky superhuman speed when I realized 45 seconds before my cue that I'd gotten a scene ahead of myself and was wearing the wrong costume. The infamous Noisy Blue Dress whipping around my ankles as I stomped away the width of the stage at the Friar's suggestion that hey, worst case scenario, we'll just stick Hero in a convent! Dissolving into helpless laughter the night John shoved the candy box under my nose with his fake moustache in it. Sucking down a quart of Gatorade after the emotional blitzkrieg of IV-I and silently thanking Shakespeare's departed spirit for leaving me a break just long enough to collect myself for the happy ending.

The IV-I that ends like this. (With apologies for the video quality. And the 25-and-cluelessness.)

When I flail about what I want, what I'm reaching for, what I miss because I know what it felt like when I had it? This is what I'm thinking about. This was supposed to be the great beginning. I'm still determined that it will be. When all is said and done and the last lights go out, if that experience ends up being the high point of my life as an actor? It was a pretty darn good one, and I will be ever thankful for that.

For whatever reason, certainly not for any reason as concrete as this one, I've been feeling lately like anything is possible in 2008, in a way I maybe haven't since I was that clueless 25-year-old. So when you see me driving and reaching and muttering that it's not enough, you know why. I know what I'm trying to capture. It's going to be mine.

Pass the Gatorade.
Posted by Unknown at 9:26 AM